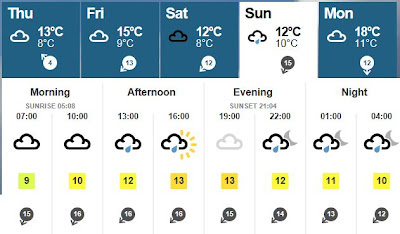 Had hoped to join the Lydney mob with Dad and Ondine for a down channel cruise and overnighter at St Pierre Pill between the Severn bridges this coming Saturday, but my long suffering, gorgeous wife Nikki has vetoed the idea, fairly pointing out that this will be the first Saturday night we've had in together since the beginning of February. It's a pity to miss the chance, but I can't argue with that and there will be other such trips later in the year.

It does however mean I'm around on Sunday to race for the Rosemunde Cup at Frampton. I very nearly won this last year in the Europe, loosing out only after at tie on discard to an Enterprise (I think the scoring system used sucks!) There was so much wind it was all but blowing dogs off their leads on the day. I still vivdly remember the second race in particular, and the shock of seeing most of the Laser fleet ahead towards the end of it, having thought I'd gotten well clear of them ages
earlier. I fought hard to pass them, managed it and then finished assuming I was therefore somewhere in the top third of the fleet; only to discover I'd actually lapped them and was at least three quarters of
a lap clear of the nearest competition.

I love sailing the Europe. Really going to have to think about selling her though, as my time on the water these days is completely absorbed between Penny and Ondine.

Anyway, the forecast for Sunday is looking like it'll be fun with Penny. Although we've proven it's not impossible to win races with her, for reasons I can't really fathom our best results seem to always come in a drift, which this weekend will be not. However, I would rather sail Penny in good company with my crew and struggle to better a mid-field finish than sail the Europe solo even if that could give me a shot at the front of the fleet.

And looking at the rain in the forecast, camping on the banks of St Pierre Pill this weekend would have been a damp affair anyway.

On the subject of pills however, I'll be lacking a crew again a week on Sunday as she's planning to race a Topper to complete the Race Training course she's spent the last six weeks on. There will be a 6.6m due on the Severn around lunchtime however, so might try and get up to Frampton from Lydney with Dad and Ondine to take a look at what the mouth of the pill looks like on a neap tide. Dry mud, I suspect. But the Noose is always an adventure.
Posted by tatali0n