Of Blue Skies and Warm Winds 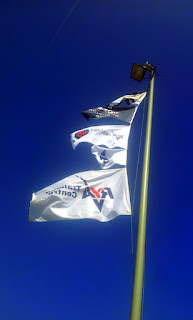 The weekend just gone turned into the perfect end to a week sweltering in the office, staring out of the window at gorgeous, cobalt blue skies and the rustling trees, watching the glory of a British summer pass me by, tantalisingly close but just out of reach beyond the self-imposed prison bars of weekdays 9 till 5.


Friday hit, the weekend came crashing in, and miraculously and completely out of character, the weather held.


Saturday was an Open Day at Frampton Sailing Club, so we spent the day on the water giving joy-rides to visiting members of the public in the Club training boats; Gull Esprits and Wanderers. A stiff warm breeze and bright sunshine, it was everything sailing should be and a perfect advert for our sport and the club. We usually snare a handful of new members out of these events. I'm pretty certain from the feedback of the day that this one will turn to be no exception in that respect.


It was also the first day of the year of sailing in shorts and T-shirt. Hope there are many more to come!


I then had a gig that night in Bristol. Unusually, my wife Nikki had the night off from work so was able to come out to the gig with us. We had the full band, all members present and correct for a change; they played well and the music went down a storm with the crowd. A late night, but fun.

Sunday was the last day of Race Training for H, so she wanted to race single-handed again for the same reasons as before. Although that left Penny and I crewless and grounded, it's a small loss for a significant gain. The boost to her self-confidence, boat awareness and handling skills from both the course and the time spent sailing racing solo has been significant and marked, and is gaining us places when we do get to race with Penny.

I had the option of racing the Europe, who is, it must be said, weathering very well despite my continual neglect, but the forecast was for the strong Saturday blow to drop to a force 3 northeasterly by Sunday, and it remained a constant prediction through the week, and my friend Hayley was game for another blast around the Severn with her Wanderer again. No contest really.

Sunday was a due relatively small tide of 6.6m, nearing neaps, high water expected at Lydney for 12.27hrs, so we agreed to meet up at the yacht club for 10:00hrs. There was more wind in the morning than I'd expected, a definite force 4+, but still from the northeast as promised, so we erred on the side of caution and put a reef in the mainsail. Hayley's only just returning to sailing after some very serious surgery to her spine at the end of last year, so to risk any kind of upset on the water would have been irresponsible.

We launched with the vague plan of seeing how far up river we could get before the tide turned. With the wind set against the flood tide, the tidal flow of the Severn added 5kts to the windspeed, pushing it up another factor to a clear F5 and setting up a steep, breaking chop over the tidal races in the river. Peter and John were manning the Club rescue boat 'Braveheart', James was launching his Enterprise behind us, and there were a couple of SARA RIBS (Severn Area Rescue Association) out on exercise, one of them ambling over to us in curiosity to watch as we launched.

﻿﻿﻿﻿﻿ ﻿
Despite the many witnesses we launched without mishap, got the foils down and set off across the river on a close reach towards Panthust Pill, waves crashing over the foredeck, thoroughly dowsing us in brackish spray. A double-masted motorsailor, tender in tow, was approaching Sharpness in the channel so we tacked away before we got too close and confused them with our intentions and headed upriver in a series of loose beats and close reaches, footing off for speed rather than height and letting the rush of the tide push us up river as much as our point of sail.


The third beat took us past Old Sharpness Dock where we saw the SARA boys preparing to recover one of their RIBS over the wall. Our next tack took us out towards Wellhouse Rock in a short beat before we tacked away again before getting caught up in the chop of the overfalls below the rock. A couple more tacks and we were past Purton, with the GPS on my mobile topping out with a maximum speed (VMG) of 9.36kts at one point. Not bad for upwind against a gusty F4 in a reefed 14' dinghy, and more credit to the flood tide than our sailing I suspect!


Past Purton and Tites Point, the centreboard began to ground out on the sandbank off The Royal Drift, a reminder that despite the ferocity and height of the tide we were close to neaps and vulnerable to, as the Admiralty Chart so sweetly describes this area of the river, "Changing Depths". The time was a few minutes before midday, so another half hour before top of tide, but rather than push on with the river and our luck we tacked and then bore away, reaching back across the river against the flood, surfing down the steep, breaking swell still being kicked up by the wind over tide.

We spent the next forty-five minutes tearing along on the plane in a series of broad reaches, the boat speed exhilarating but the actual speed over ground low and making them last forever with the tide now punching against us. Eventually the inevitable happened and the tide turned (again, as the Admiralty Chart relates, "There is practically no slack water" in this part of the world) and with the ebb the wind died to a whisper and the churning waters smoothed out to flat. We dropped off to a run and, goose-winging the jib, headed back to Lydney Harbour.