With last Sunday bringing light, shifty, drifty conditions, a small fleet of eight boats and all very practised, accomplished racing crews, our second ever Enterprise Open with 'Penny' was always going to be a challenge. After the brutalities of the previous Bristol Corinthian event, where, truth be told, we only managed to salvage our way back from last place through bloody-mindedness and attrition by simply refusing to give up and go in when saner souls had long since retired, I was feeling somewhat doubtful of our ability to even keep up.

To our theoretical advantage, this event was on our home water, but that just plied on the pressure. To fail to turn in a respectable performance here was going to say something definite about both 'Penny' and us, her crew. 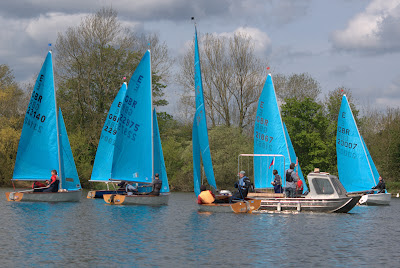 The order of the day was seet as two back-to-back races, followed by lunch, followed by another couple of back-to-backs. We made a point of getting to the line in good time, got a feel for the conditions and worked out the layline for a conservative committee end start on starboard, getting a good feel for the timing on this line. Which was my first cardinal mistake, and should have cost us the race. 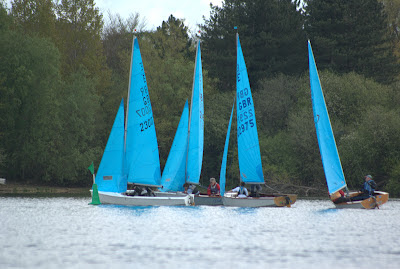 Twenty seconds before the starting gun went, I tacked onto starboard just inside the layline I'd worked out, set on making a timed run at the line. And the half-a-dozen other boats that had opted to instead queue on it waiting for the gun put up a big wall that sucked the already light air out of everything downwind of them, killing our sails and leaving us becalmed. The gun went off, the rest of the fleet launched itself over the line, heading or the windward mark, and I was left struggling to put way back on, spitting and cursing at my stupidity for getting into such a daft position in the first place.
﻿﻿
In the end, it would be generous to say we were only a minute late crossing the line. We tacked immediately onto port to try and make what good we could out of our now clean air, but it looked like the damage was done, we pushed on, bleakly hoping for the chance to catch the back of the fleet. Moral of the story; in light airs never let yourself get more than a couple of boat lengths behind the line, clean air is everything. What really sucks is that I'd already known this, I'd been here before years back in the Moth, and so should've known better. 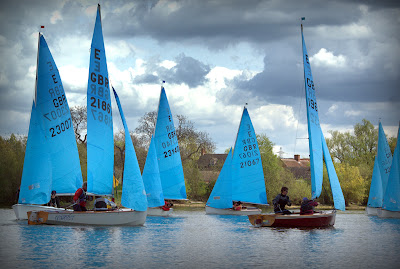 I don't remember the windward mark rounding. We might, by then, have caught up with one of the stragglers, but I'm not entirely sure. If not, we caught him not very many moments later. But then, at the top of the second beat, it all miraculously came good. The entire fleet ahead of us sailed into a hole at the green mark (on days like this I like to think of it as the Frampton oubliette). There was much shouting of "Windward!" and "Starboard!" and sundry cursing and grunting as boats becalmed, backed up, hung up on the mark and each other and then the melee drifted a boat length or two away from the mark as they struggled to sort themselves out, leaving us just enough room to round it inside them and sneak ahead behind the one other solitary boat that was able to sail clear. 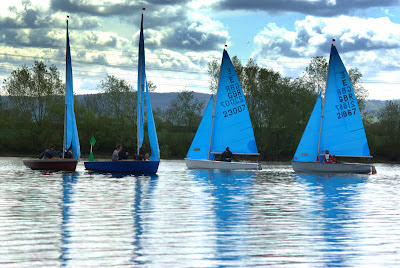 From almost last to almost first in the space of the first lap. It's little moments of redemption like this that I utterly love and adore in sailing. As one of the other helms that day observed, nobody's safe until they've crossed the finish line. 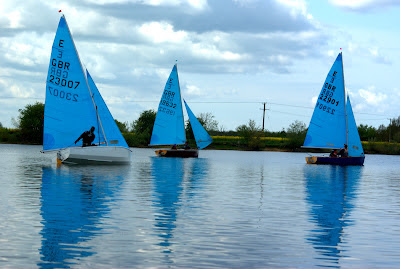 Lessons learnt from the first race, our start in the race following was almost text-book, setting us up as the second boat around the windward mark. Our fortunes reversed in the third race, when we were badly headed on a close fetch just before we reached the mark, and subsequently becalmed in the shadow of the nearby windward bank, suffered the indignity of most of the rest of the fleet sailing over us. 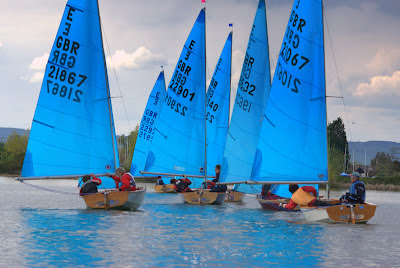 Against such a strong field we were never going to hold the advantage, but we held our own against most, and matched Geoff and Sue, beating them twice for their two wins against us. In doing so, we exceeded our ambition for the day; I'd set it at simply not coming last, but H over-ruled me, scolding my lack of ambition, and said that we'd instead aim to keep up with Geoff. In the end, we matched them for overall points, but lost out by a single point after discard, the decisive moment only coming in the last leg of the very last race when they overhauled us and the boat ahead on the reach down to the final mark, having been otherwise left behind for the rest of the course. It was a fine comeback for them and a fair win over us, the resulting second place giving them the edge they needed to finally beat us overall. 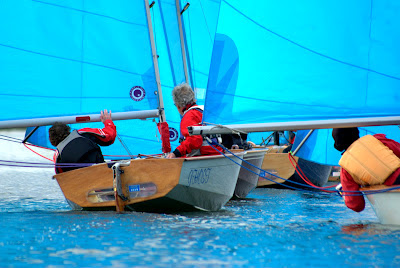 It was, in summary, possibly the most enjoyable day's racing I've had in quite a while. Splendidly close, tactical and competitive, we made a few mistakes, leant a few lessons and consolidated on lessons and experiences already previously learnt and turned them into places. And, in keeping up with and in contention with the rest of the fleet throughout, redeemed both ourselves and 'Penny' following the brutality and attrition of the previous Enterprise Open in Bristol. 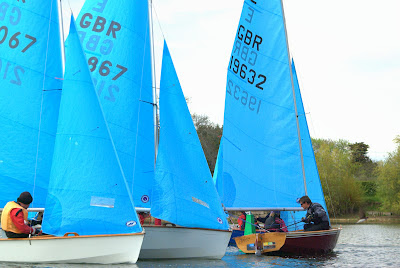 The next Enterprise event is Thornbury Regatta in early June, out on the Estuary. That's going to be different again and will bring with it all sorts of new and different challenges.