Well, the forecast started out promising at the beginning of last week, with the tease of a lot of wind for Sunday's racing. Then, as the week progressed, the weathermen in their wisdom revised, and by the time the day itself arrived, we were sat looking at a muddled and shifty F2/F3 out of the northeast. Then again, a bad day on the water pretty much beats a good day anywhere else. 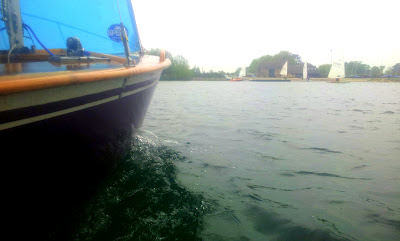 The first race of Frampton's Rosemunde Cup was a general handicap that saw 26 boats a the start line with what seems to be becoming the usual distinctive port bias. With such a congested line, we decided to pick our spot early and wait, going for a conservative mid-line position. It almost ended badly as all the smaller, lighter single-handers accelerated away, rolling over us as we struggled to find our wind. However, as we dropped out of the back of the mosh-pit, we took advantage of the space for an early tack onto port to find clear air, picking up the shifts just right and soon fought a little way ahead of the gaggle to round the windward mark with the front half-a-dozen boats.

Frampton uses a colour system for identifying the racing marks, with Green, White, Red and Yellow set in each of the north, east, south and west corners of the lake respectively, and intermediary Green/White, Red/White, Red/Yellow and Green/Yellow marks between them. ﻿ 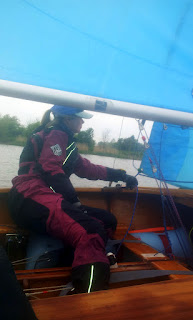 The windward mark set for the first race was Green, and is notorious because of its position around a dogleg corner of the lake, the air heavily shadowed by the surrounding foilage and macliously interfered with by a large tree on the inner corner of the elbow.


I tend to think of it as the Frampton Oubliette.


It was exactly this situation that saved us in the first race of the Enterprise Open a couple of weeks ago when all our visitors sailed into it and we sailed past, gleefully giggling like mad, demented things.

This time it bit back.


The few boats ahead pushed through the wind shadow and out onto the run down to white. We followed, and just as we goosewinged and trying to find our wind, the rest of the massed fleet rounded behind us, blocking our air. We stalled and they rolled over us, heckling as our happless burgee spun in witless circles at the top of our mast.


It could have been worse. Once recovered we did what we could to repair the damage, careful to avoid any more holes in the pressure, and finished with a mid-fleet position, but at 14th place this one was to become our discard. The OOD improved the course for the pursuit race that followed, and the wind picked up, but then, inexplicably, restored the original race order for the final handicap just as the wind was fading again, so we were reduced once more to dodging holes and wind shadows in the lee of the windward bank.

Our final result of the day was 10th place out of 27 qualifying boats, so I'm quite content. There were three boats ahead of us in the results that I feel 'Penny' should be beating by now, and one or two further ahead that we can now beat on occasion. The conditions of the day with a F2/F3 northerly however are, looking back over the logs, proving to be our most challenging. In a blow, Penny's weight is less of a disadvantage against the rest of the handicap fleet, and once we're reduced to a drift we just seem to be able to switch a gear and conjour pace out of nowhere. I suspect our relatively light crew weight and my few years of racing a British Moth probably helps. 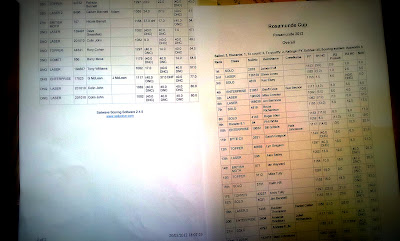 Of course, all this means that what we really need to practice for consistancy is exactly these sorts of conditions. And, ironically, they've been the prevailing conditions for this season so far, which is showing in our results overall. So much for the promise of spring gales.