The earning of a Lazy Day; part I

I didn't sail last Sunday. So completely out of character you'd think I'd been ill, but no. Nikki had the day off work, it was blowing a gale or as near as in the morning, and I took one look at the tree dancing outside the bedroom window when I woke up and agreed I'd spend the day with her for a change, that we'd walk the dogs together after a late, lazy breakfast.

Truth be told, I was feeling pretty blown out from the exertions of Saturday, so felt I'd earned a lazy day. Nor does it happen often that I have "time off" at the same time as my wife, so it would have been curmudgeonly to have not taken the opportunity to spend some time with her. Especially as I have at least one more long weekend planned sailing away with Dad before the end of spring. Even so, it is the first time in an age that the wind has blown and I've not felt resentful about not being sailing. In all honesty, I feel like I've been pretty much used and abused by the elements over the course of this year so far, so a rest was not begrudged. 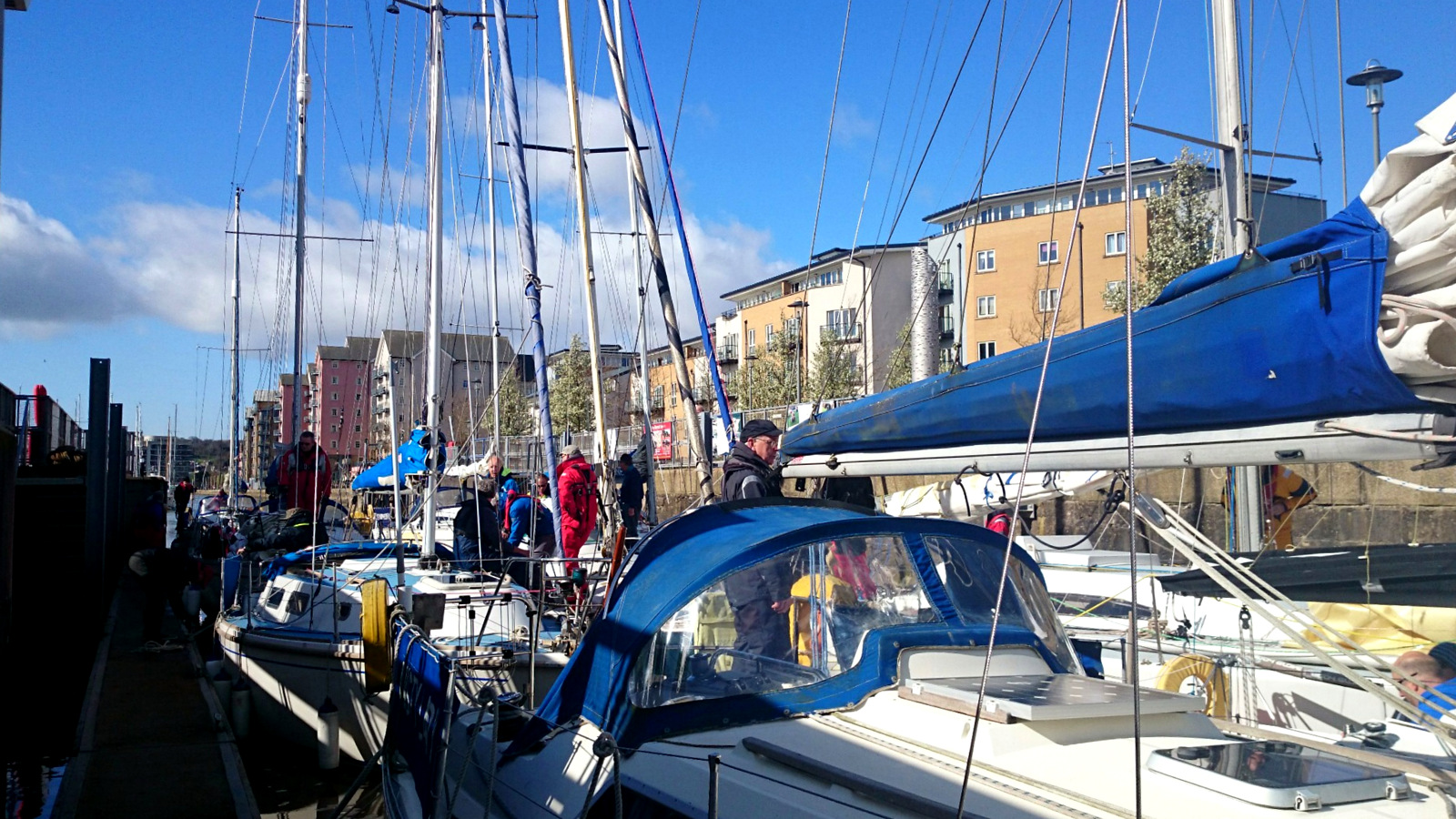 The forecast promised a westerly F5 off Portishead, and a race to the Shoots and back was scheduled for an 1115 start with the Portishead mob. My son Ben was away, visiting his girlfriend Emma up north, so it was just Dad and me aboard. I picked Dad up from his house at 0830 and we got to the marina for around 0915; Calstar was booked into the lock for 1030. On arriving, I took a quick peek over the dock wall and saw the waters out in the channel doing pretty much as I'd expected them to do and I casually mentioned as much to Dad as we walked down to the boat. He seemed pretty sanguine, though the marina is very sheltered from the prevailing wind, and with the morning sun shining cheerfully, it was hard to credit the picture I'd described.

A little before 1030 we radioed the marina office to let them know we were leaving our berth and got early into the waiting lock. Eight other boats snuggled in behind us, making for a very cosy huddle as the lock went down. The gates opened, and we motored out past the breakwater. 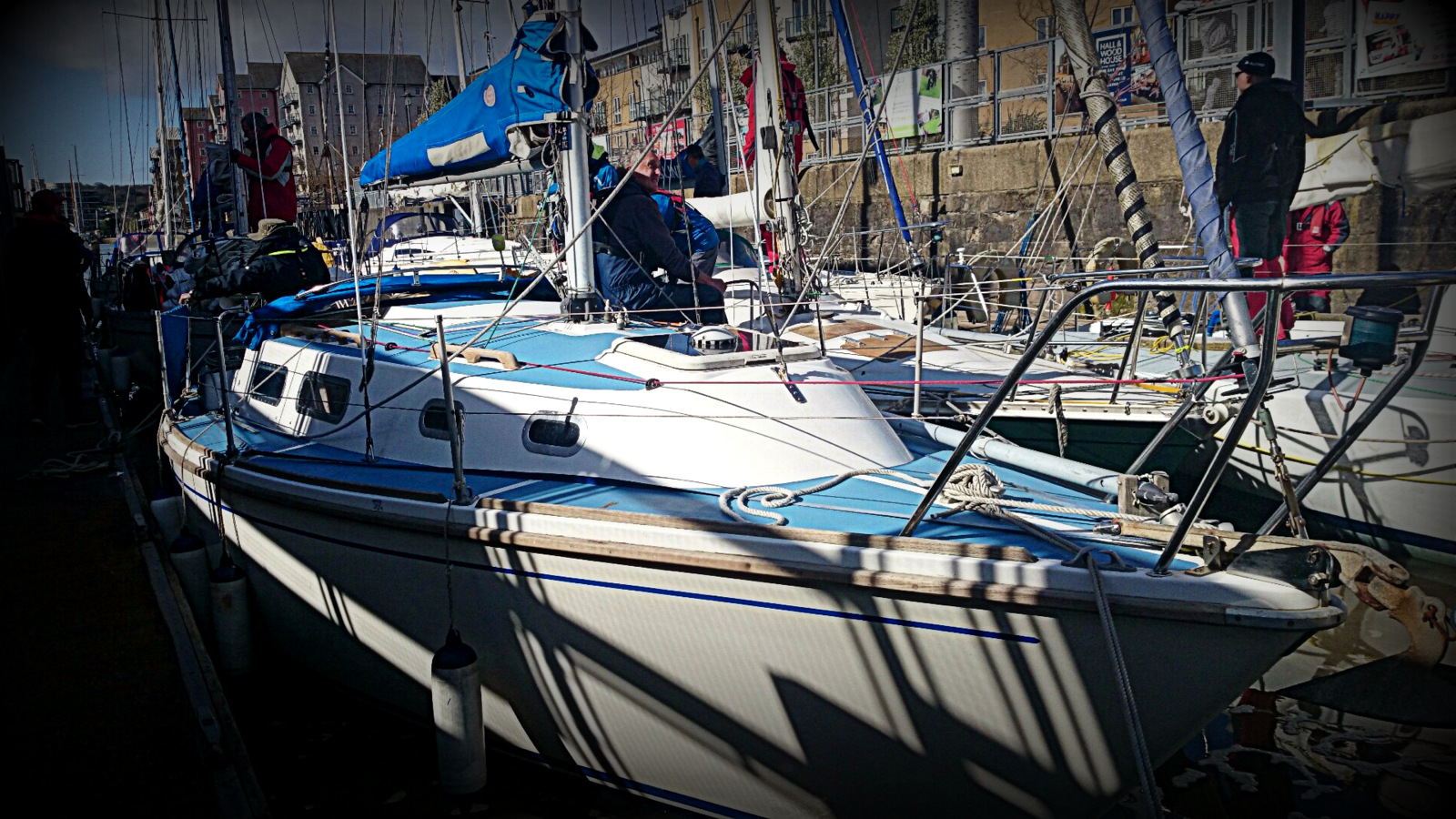 We met a short, sharp breaking sea. Short and sharp, but only about a meter of chop as it was flattened by the flooding tide even as it shoaled up against Portishead. The conditions of similar strength to those we'd sailed back from Cardiff in a few weeks ago. Dad, at the helm whilst I prevaricated over raising the sail, had displaced his previously sanguine air with a look of slight concern tempered with a degree of resignation; he noted he wasn't particularly happy with the situation, but the little boat seemed to be managing the choppy waters with her usual nonchalance and grace. I kept a keen eye on the other boats in the racing fleet, saw them begin to haul up sail, and so did the same, leaving a single reef in the main.

With the sails all up, I took the helm, and the little boat seemed to relax as I stilled the engine and she found her pace and rhythm through the choppy water. A couple of tacks and a gybe as we loitered under starter's orders behind the line went without mishap, although I intentionally kept as clear as possible of the other boats waiting to start with us.

The caution cost me, and we were a minute and a half late crossing the start line, behind the rest of the entire fleet. A two leg race, the first leg was a downwind reach of about four miles up to the Lower Shoots cardinal just below the Severn Crossing, to be taken to starboard, followed by a beat back to finish where we'd started. At least we had clean air despite our slack timing on the line and within the first twenty minutes we'd caught the two back markers, overhauling "Socotra" and gybing around the Lower Shoots just on the tail of "Avalon" who we then slowly edged past on the starboard beat that followed, sailing low and just a little bit loose on the wind until we punched back into clean air beyond her.

Both Socotra and Avalon were pointing much better than poor Calstar however, so that was the high point of the race. As the tide turned and the wind strengthened more and the chop, now set against it, increased. Our little boat began to sag to leeward, and within another half hour both Socotra and Avalon had stolen back their lost places and left us for dust.

We finished last, but we finished, seconds over two hours from when we'd started, pleased to be done.

It was our first race, and I'm happy with how it went. In real terms, although we did place last out of the eight boats racing, we were within ten minutes of third place once the respective boat handicaps were taken into consideration. That's close enough to the pack not to be embarrassing, and ten minutes is time we could easily find with all manner of small improvements easily made, not least our starting and general boat handling.

But the point of Calstar is not to race. I race dinghies, and I can get fiercely competitive with the other boats on the water at times, in a way that I'm not nor ever have been in any other aspect of my life. But the point of my Enterprise "Buffy" is to race. The point of Calstar is to not. The only reason for racing her is to get to know her and the local waters in a way that I understand. Saturday was a good example. If we'd not been racing, we wouldn't have gone out in those conditions. But we were, so we did, and I'm glad, because the experience and the lessons learned were invaluable.

We lost through caution, because I was slow on the start, favouring room over position. We lost because I was lazy with the sail setting. Dad was working the winches whilst I helmed, and because he was finding it hard work I was easy on him, accommodating compromises in the setting that I wouldn't if it were me working the winch. And we lost because I wasn't confident enough to put the second reef in when the tide changed or reduce the genoa by a turn or two. Although I'd guessed what was happening, looking back on the GPS track the damage that shyness did is obvious; you can see exactly when the tide turned by the sudden, definite sag to leeward as the little boat became over-pressed. That's when the two behind caught us up and then left us behind.

Interestingly, I think I'm beginning to get much more of a feel for Calstar's balance and trim now. After I first sailed her, I noted how powerless I felt when she heeled in the wind. With a dinghy, I'd throw my weight out to balance her, and spill air from the sails to bring her back to level. With five tons of boat, it felt then as if she were oblivious to where I put myself. It didn't on Saturday. Where Dad or I placed ourselves, especially as the gusts hit, made a slight but distinct difference to the stiffness of her response, and therefore how well she picked up speed, pointed or instead fell off to leeward, especially during the beat back to the finish line.

A good friend, infinitely more experienced than me, did tell me he was sure I'd start to find that to be the case. I'm very happy to say I believe he was right.

We were afloat just over three hours, and covered 13.3nm, by far the most of that under sail. 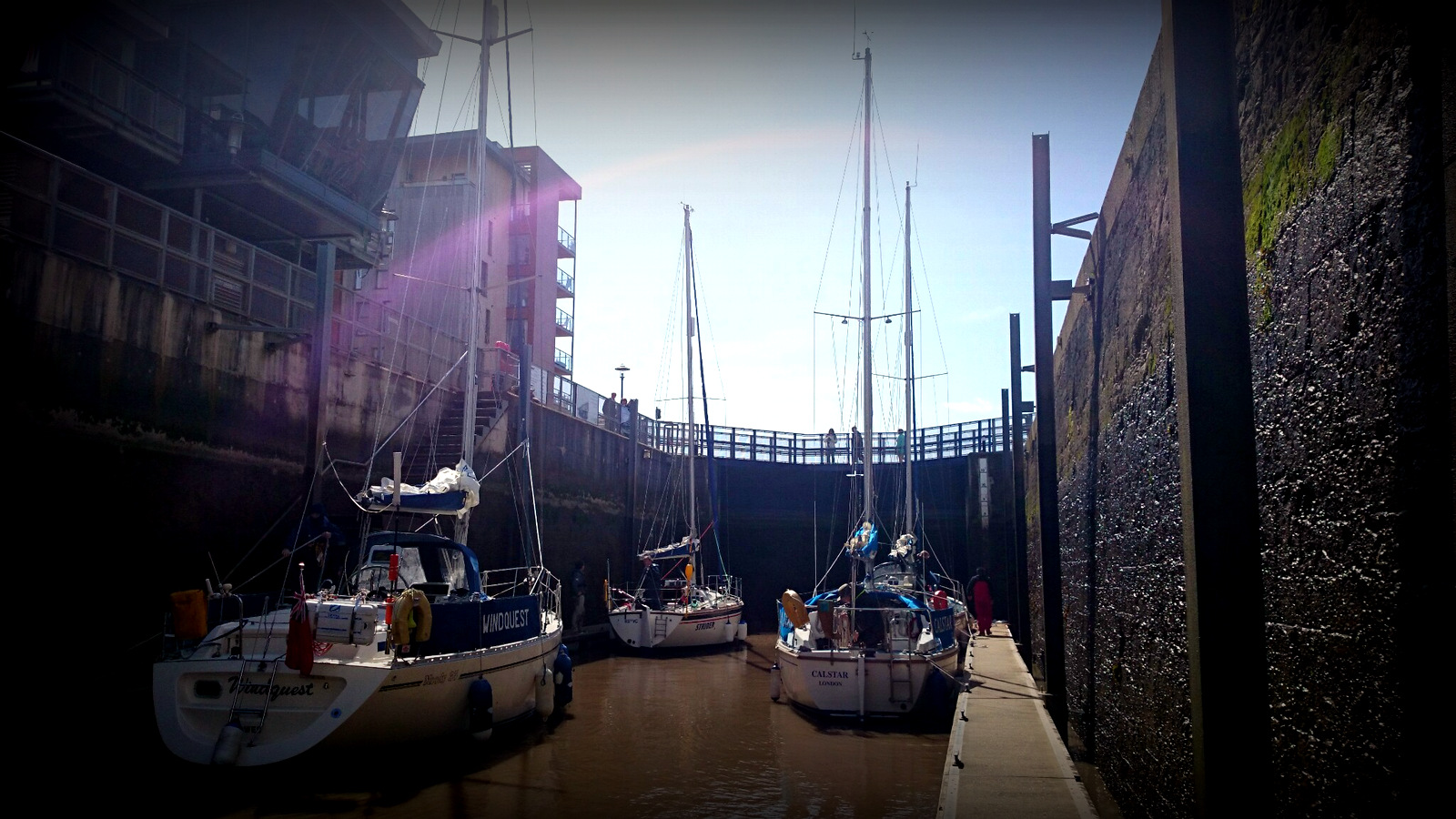 I got home a little after 4pm, just time to soak in the shower, fight the urge to fall asleep, and then get changed and head back out to the evening's gig. Sound-check was at 1730, but fortunately the gig was, for a change, very local to home.
Posted by tatali0n