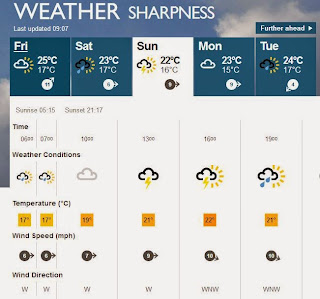 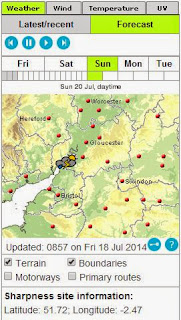 Lively night last night. Went to bed about 1am, noticed the wind was
picking up madly. Just as I settled into bed with a book a lightshow
started in the heavens and the downpour hit. Lasted into the early hours
of the morning. Most of the dogs slept oblivious.

Except for Jack, who'd bark once, loud enough to wake me, just before
each flash of lightning. Poor lad wasn't so much terrified, as just
anxious, unsettled and confused; think he was just desperate to protect
us from the big, bad storm, but couldn't work out how.

Consequently, I didn't get much sleep last night.

I've tried checking on Buffy via the Sailing Club webcam, but the camera
is down. I expect she'll be fine, she was well tied down in her berth
when we left her on Wednesday.

Dad and I are fetching Ondine back from the Club tomorrow morning,
getting her ready to travel, as we're off to Fowey in a week. By way of
dress rehearsal though, we're going to take her over to Lydney on
Sunday. High tide is 1447hrs, but it's very neap; a mere baby of a flood
at 6.2m.

It'll be lovely to get back out on the River again. I should say "if" as
I've taken a peek at the forecast for Sunday, and the forecasts are
suggesting more thunder and lightning for the area, right across the
period we should be sailing. Will just have to keep our fingers crossed.
The weather's a funny old thing around here. You never really know what
you're going to get until you're out in it.
Posted by tatali0n