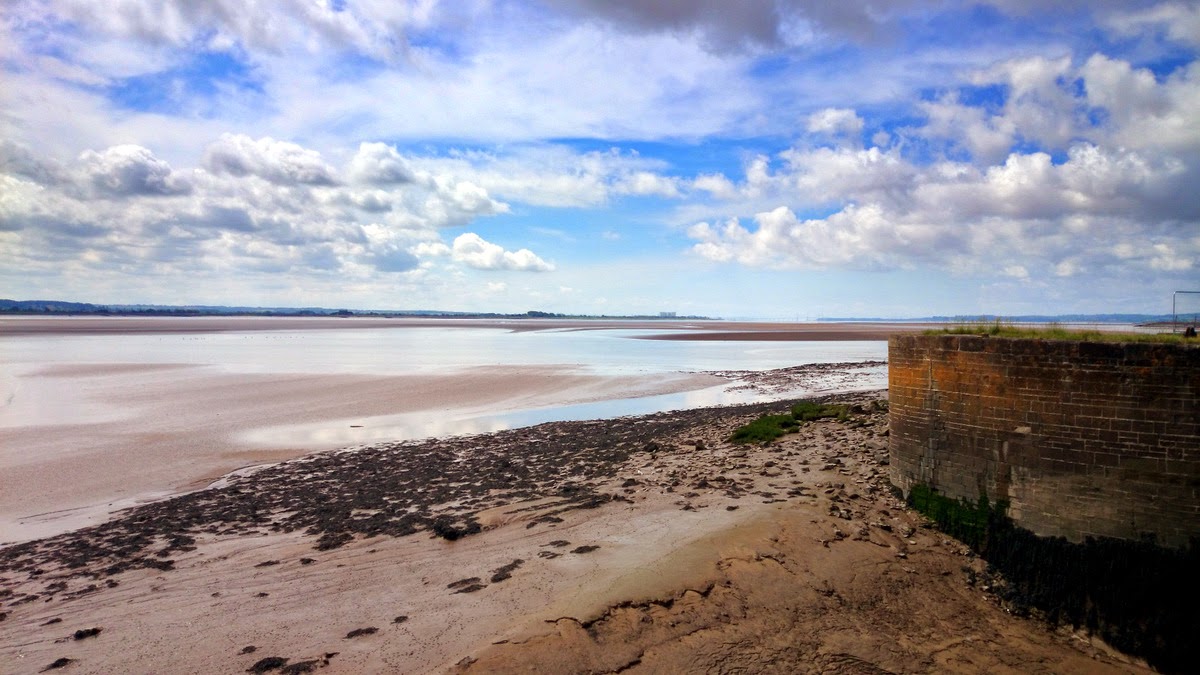 Took to ignoring the forecast as the weekend went on. Main concern was the risk of lightning on Sunday afternoon whilst we were out sailing. At Frampton, if you're hit with a sudden storm, you're only ever five minutes from shore, and in any case, the lake is surrounded by trees all a lot taller than your mast.

Out on the Severn, you have lots of flat water around you, few other boats if any for the heavens to target instead of you, and once you launch from Lydney, you ain't coming back until the tide changes. 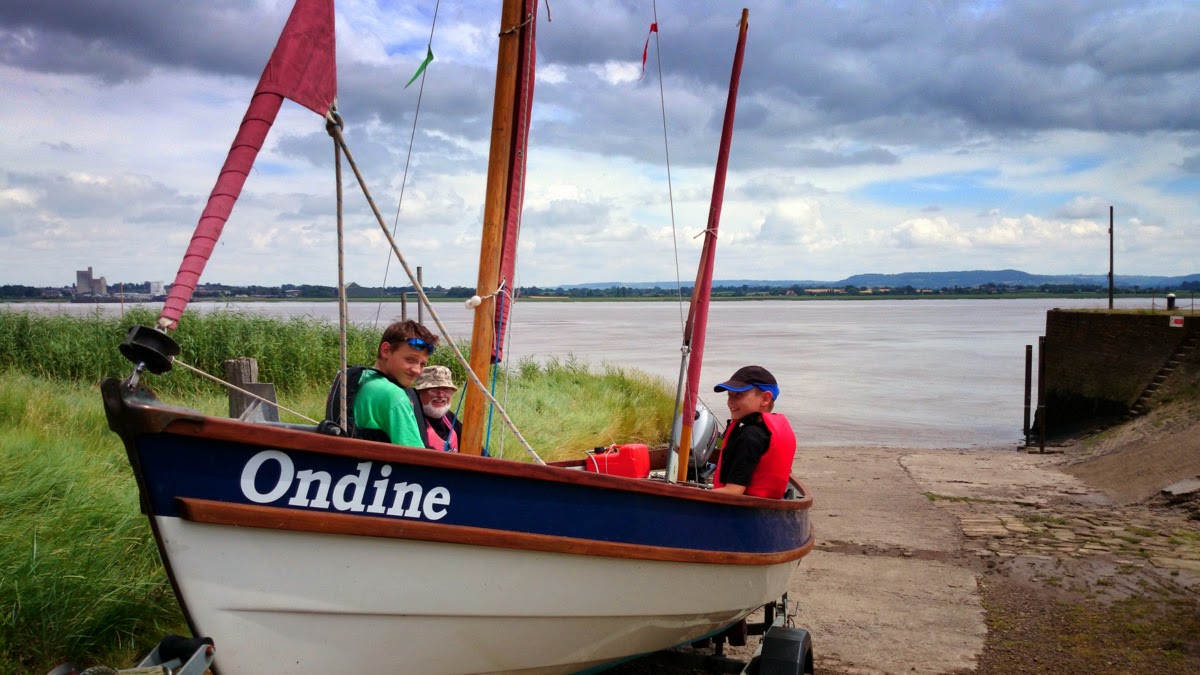 In the event, the sky was blue and looking benign across the morning, the only disappointment being the seeming lack of wind; but the forecasts I did check before leaving had given up on the thunder and lightning, so all looked good.

The promise of a couple of water-pistols and the company of my eleven year old cousin Ollie were enough to draw my youngest lad Sam away from his video games to come out sailing with us. First time I've managed to drag him out on to the water since Cornwall last year. Lydney Yacht Club were supposed to be holding their Family Weekend this weekend, with a water-fight apparently scheduled for the Sunday tide (thus the excuse for the water-pistols), so I was a little apprehensive as to what we might find when we got there. 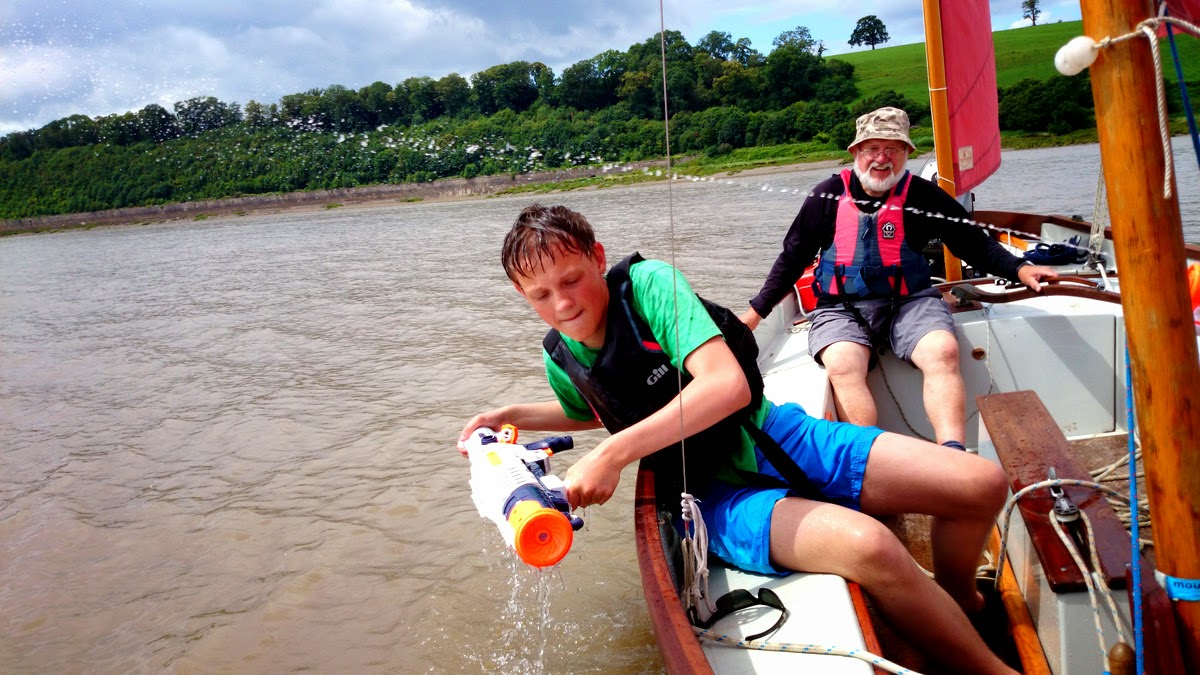 In the event, the earlier inclement weather of the weekend seemed to have driven them all home as the Club was all but deserted. Which I've got to say suited me fine. They're lovely people, but I've been trying all year to find a chance to get back out on the River. Didn't really want a "water-fight" getting in my way.

The Safety Boat crew did turn up, but as it looked like we were going to be the only boat on the water, we agreed we were more than able to look after ourselves, and gave them the afternoon off.

We launched just as the tide covered the bottom of the slip. With barely enough wind to give directional control through the shoals, we drifted (or rather, were flushed) up past the gap between Sharpness and Wellhouse Rock. At this point, totally becalmed I gave into Dad's impatience, furled the main and jib and kicked the outboard into life. The boys amused themselves with their water-pistols, I surrendered the helm to Dad, and we took them on an ambling tour of Frampton Sands and the lower reaches of the Noose, showing Ollie the sights and landmarks of the estuary.

We started to bump into the shallows of the Noose a little before top of tide, so used the outboard to stem the flood until it turned. As I'd hoped, the wind filled in against the ebb and we hauled sail and cut the engine, to enjoy an energetic beat back to Lydney. The nice, steady F3 blowing up against the falling tide gave Ondine enough heel enough to show Ollie, his first time aboard a sail boat, a proper taste of sailing, and pushed up enough of a sea to wake up Sam with the spray being thrown over the bow. He'd fallen asleep on the foredeck in the sun, using the anchor as a pillow, strange lad. 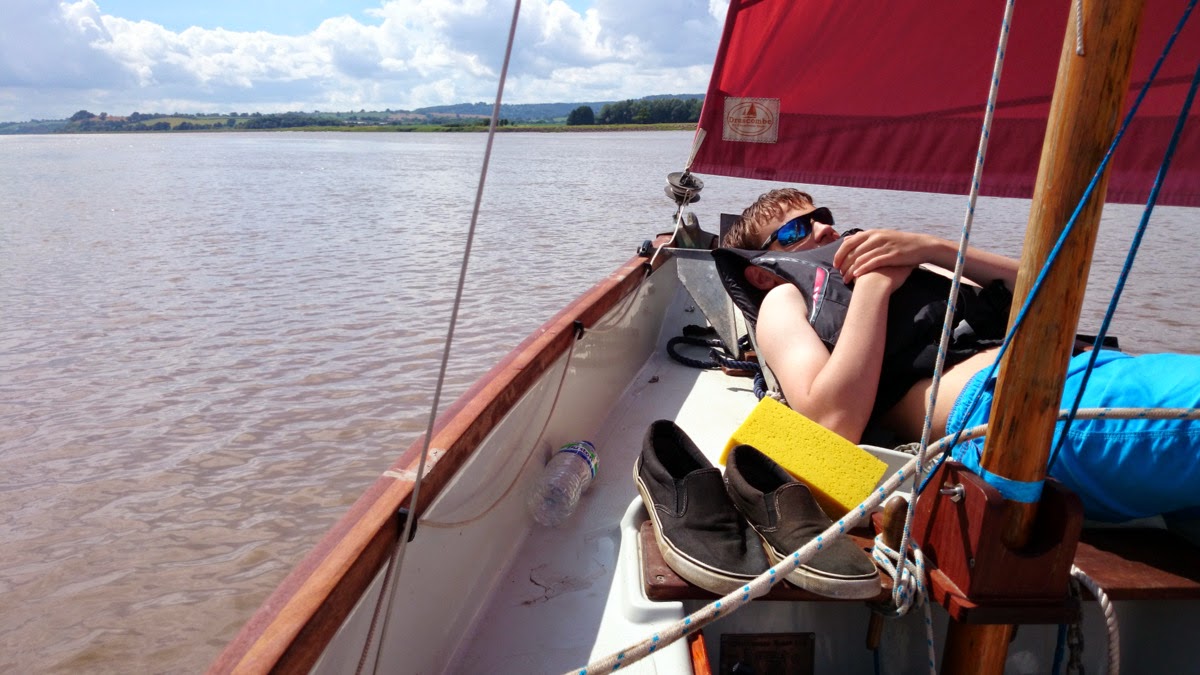 Landing at Lydney is a bit like landing a glider. With a 7kt tide, your options for a go-around are limited, so you only really get one chance to keep your dignity intact.

That's not entirely true. It was a neap, so the flow was lessened accordingly, and the breakwater does give a bit of slack in the eddy behind it to let you scratch back up and around the harbour wall if it all goes wrong. In the few short years I've been sailing out of Lydney now I have ended up, for one reason or another, getting washed past the breakwater a couple of times, once in Ondine and another time at the helm of the Club's Wayfarer. I've always made it back unaided, but it is difficult, and the general expectation is that most people won't. 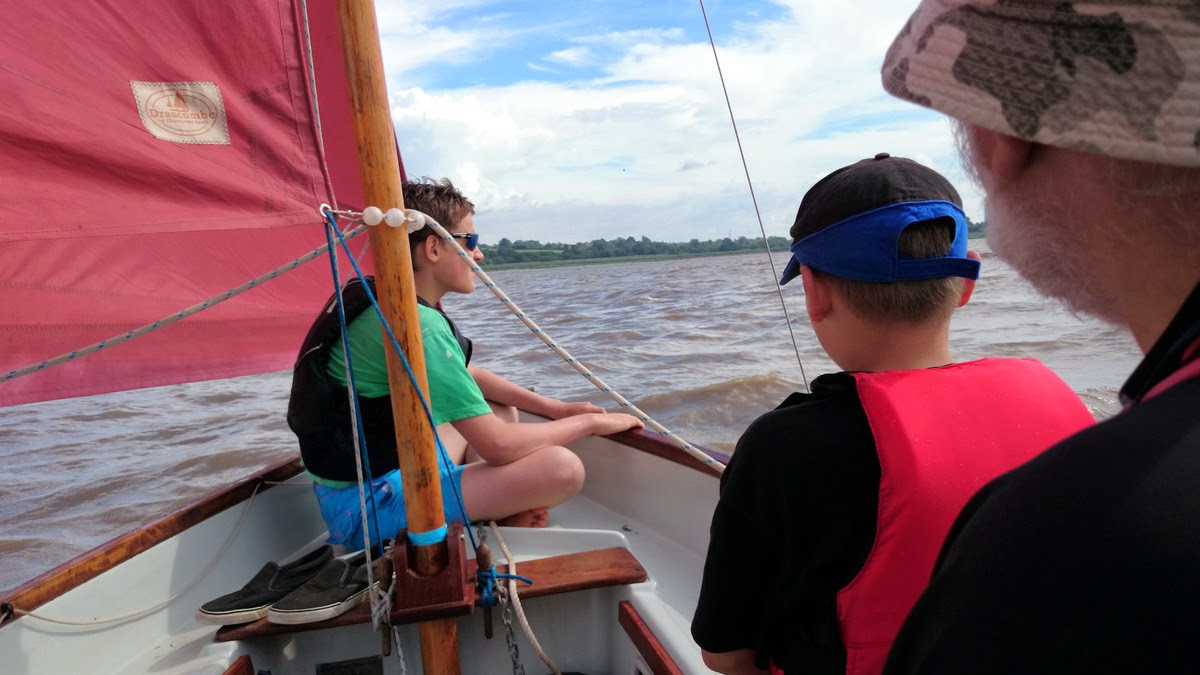 Accordingly, the Club keeps a very long, thick warp in the Safety Boat hut with a lead weight the size of a small cannon ball spliced into the end of it. The accepted drill is you scrape your way back up to the harbour wall in the shelter of the back-eddy by means fair or foul, they lower the weighted warp to you, then they run it around the end of the harbour wall and haul you around.

Needless to say, this time we landed seamlessly and without any drama, recovered the boat to the top of the slip, lowered the masts and hosed her down. Just as we pulled the cover over her, black clouds tumbled in, the heavens opened in a downpour, and the thunder started to roll. 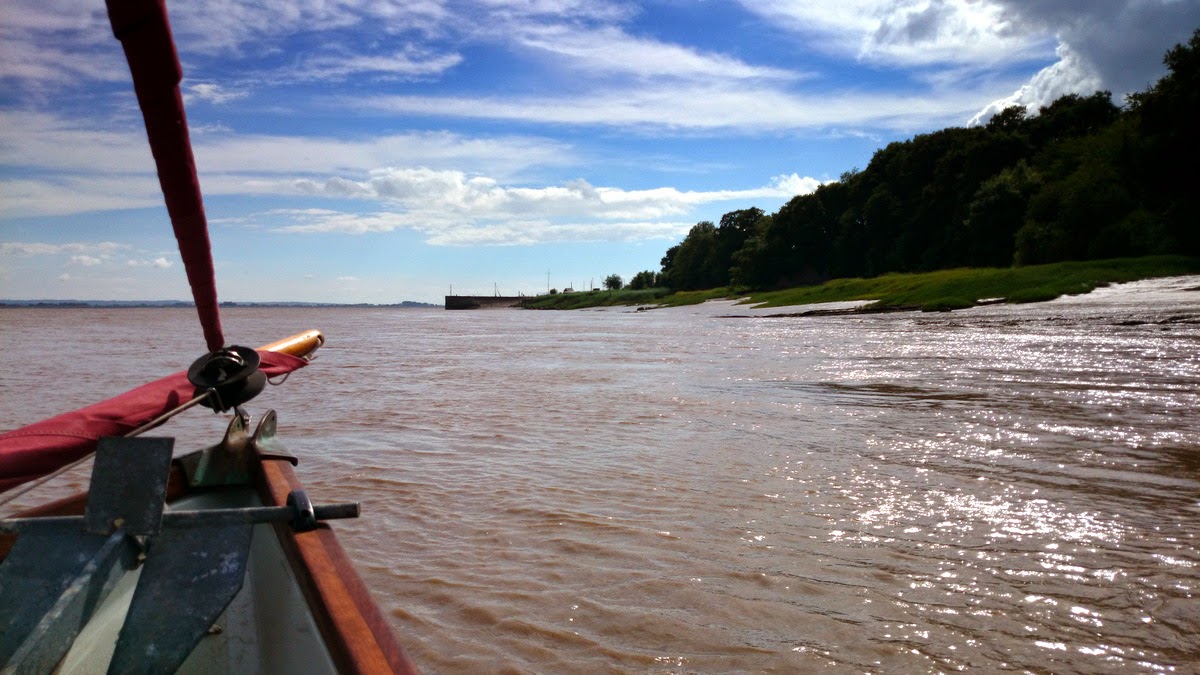 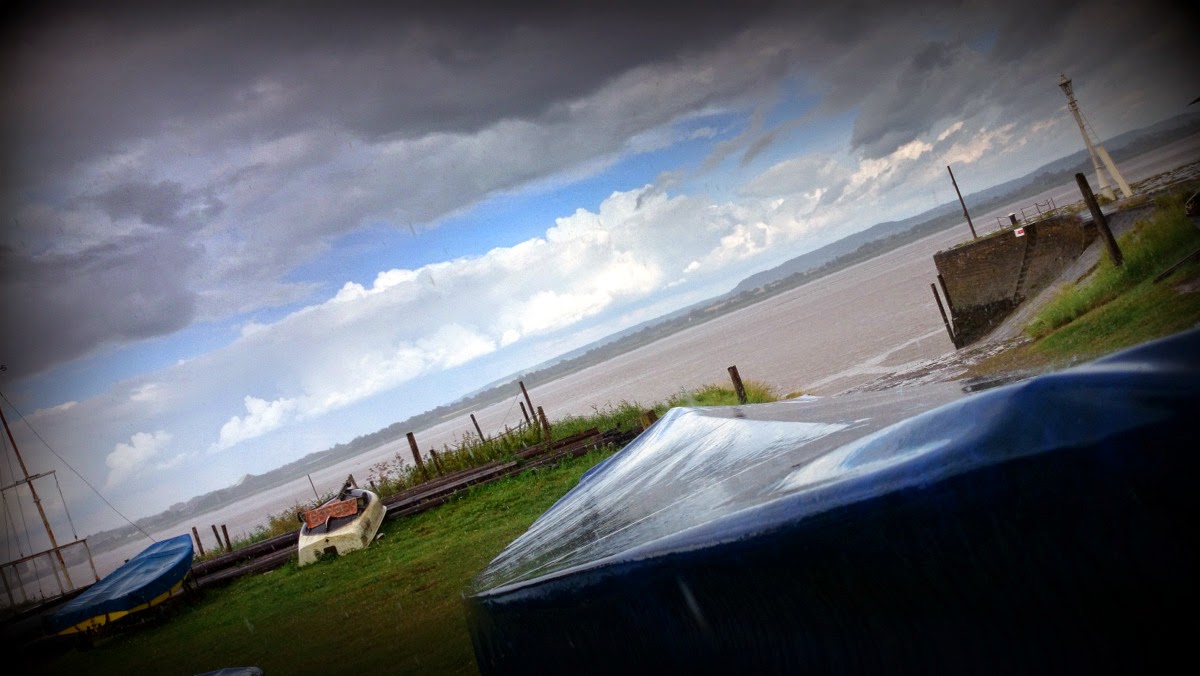 It was a great day. Seems we've sold Ollie on this whole sailing lark. Sam, on the other hand, whilst admitting he did enjoy himself, says that's enough sailing for another year, so intends to return to his video games. You can lead a horse to water . . . .

In four days time Dad and I head for Fowey. This was the perfect dress-rehearsal. So back now to watching the forecast with trepidation. Though I have to say, for the moment, it's looking really promising. 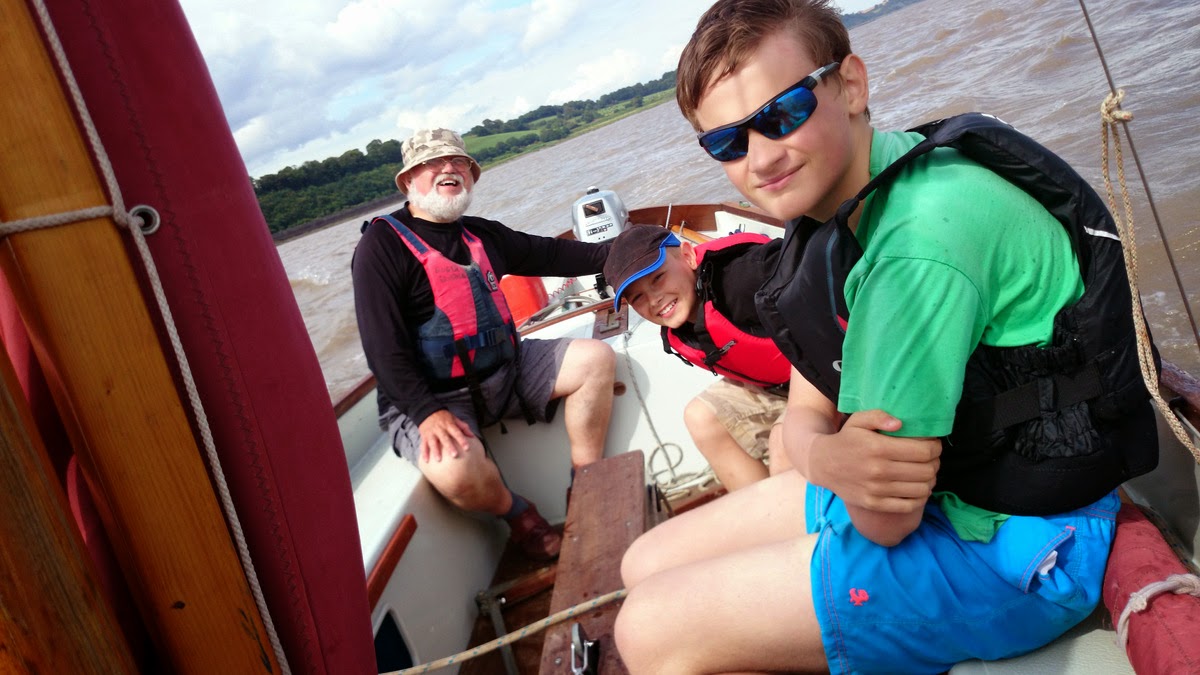