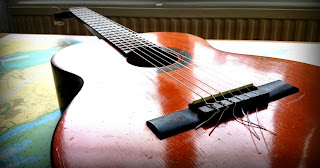 Thoughts are with the families and crew of the Cheeki Rafiki. Hoping against hope, but others have managed a lot longer than 20 hours adrift and yet come back. For those in peril on the sea.

Thoughts are with Webb Chiles, a lovely man, as generous with his words as he is eloquent. In a very short while he casts off on the first leg of his sixth solo circumnavigation of the world aboard his 24' yacht, GANNET.

Thoughts are with Phil Kirk, a friend and an inspirational dinghy sailor who in just over a week's time launches from Thornbury Sailing Club on the Severn in an attempted circumnavigation of the UK with his friend and crewmate Jeremy Warren aboard Jeremy's Wayfarer, Hafren.

I've restrung the Spanish, it holds its tune and fits in the drybag, and though the nylon strings, thick neck and weathered polish feel quite strange and clumsy in my hands, I figure I can compenstate for that with ale when we're in Cornwall. The Tak can stay behind and remain safe and sound on her guitar stand at the office. I've not played a nylon strung guitar in quite some time, though that was what I started out with. Suprisingly enjoyed the process of restringing her.