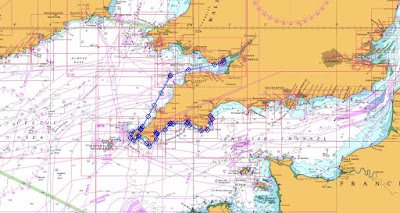 I mean blue as opposed to the silt-brown of the Bristol Channel. Not the "proper" blue water of ocean sailing; although that's always at the back of my mind, we shall leave that ambition for a later day. Walk before we run, etc, etc.

I think I've almost persuaded Dad on Plymouth as opposed to Torquay. I like Torquay, but would prefer to have it as a place to visit, and Plymouth is just so much closer to all the places I really want to sail.

When I'm not around, Dad visits the boat as much as we visit other places aboard the boat. So having it somewhere "nice" is important to him, as he spends a lot of time pottering about on and around her whilst she's moored up in her home berth. He likes the seaside atmosphere of Torquay and views Plymouth as being just a little bit too grimy and industrial.

I don't think he's necessarily seen Plymouth in its best light, so I've agreed Nikki and I will take him back down there for a wander about before the year's over.

Our current contract in Penarth Marina runs out at the end of March, so that's when we really want to move the boat around. Doesn't have to be then, but any variation either way is going to start to cost us money in short term berthing arrangements.

I'm a little bit daunted by the prospect of the trip. Although only a coastal passage, it's somewhat bigger and certainly more intense than anything we've done so far by quite some margin. Then again, if I were ever inclined to let a little thing like that put me off from doing something, I'd have never set myself afloat in the Bristol Channel in the first place.

Anyway. All of the following are just my initial thoughts and estimates. The one thing I do currently have is the luxury of time to mull all this over. Any comments or advice are always very welcome. I'm very aware this isn't anything anybody hasn't done before. It's just a first time for us.

So, the way I see it, the smallest I can reasonably break it down into is into seven legs. I can probably get two weeks off work in the spring and equivalent leave of absence from the wife, so finding seven stretches of favourable weather and tide in the space of two weeks seems plausible, even in March / April.

All measurements and estimates very approximate, times underway assuming an average of 4 knots over the ground, which I think is quite conservative:

On the Bristol Channel side, obvious bolt holes between Cardiff and Lundy are Ilfracombe or (a bit more out the way) Swansea. Between Lundy and St Ives I think we only have Padstow as an alternative.

Bristol Channel aside, which is a beast we know well enough, the two big, daunting lumps I think I need to worry about are rounding Lands End, and getting around The Lizard.

So St Ives seems a good staging post to time our rounding of Lands End. Calstar's bilge keels can take the ground happily if we want to, so the drying harbour isn't a problem. Unless the weather's very settled, I'm going to go around the outside of Longships. I'd like to do it in daylight, if only to enjoy the view.

And once around Lands End, Newlyn seems a good spot from where to stage our rounding of The Lizard. Once past the Lizard, everything there on is relatively straight forward.

I think the above, with bit of fair weather, Dad and I could probably manage on our own over a space of two weeks.

Alternatively, if we had a third or even a fourth hand to share watches with us, we could condense this into fewer, longer passages:

We would need assistance though. I reckon I could stand a 16 hour watch on my own, but more than that I suspect would be questionable. Dad's fine helming the boat under power or sail in good visibility and fair conditions, but he's a boatman at heart and not a sailor, so it wouldn't be fair to expect him to stand a four to six hour watch alone with the boat beating to windward through the dark of night whilst I slept below.

And, were it just he and I aboard, I know for a fact he wouldn't be able to leave me alone on watch above and go below to rest himself. So I think the passage will either be bite-sized chunks, or we'll have to find a friend or two willing to sail it with us.