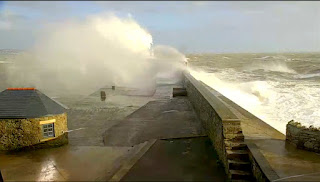 There are a couple of webcams on the Bristol Channel that I quite like. The Porthcawl webcam has long been my favourite (the above was a screenshot taken during one of the October storms), but a close second has always been the Ilfracombe webcam.

Ilfracombe remains one of Dad's favourite destinations with Calstar, and following our last trip there this summer with the Lyndey Yacht Club mob, I think this year it's probably become one of mine. 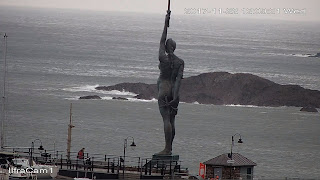 They've just installed new cameras for the latter, and the image is superb. For a webcam, that is. 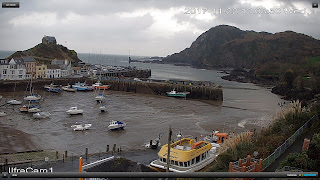 Having spent an idle few minutes watching it today, I was suddenly struck by how empty the harbour is a this time of year. 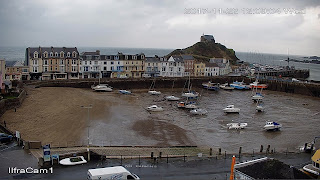 Then I remembered it is, of course, late November. Most sensible people around these parts are off the water now till next spring.

The last photo was taken back in August from up above in the town overlooking the harbour. Calstar is grounded alongside another bilge-keeler (a lovely couple visiting from Newport that same week) furthest but one boat to frame-left, by the bottom of the slipway.

I'm not actually sure when we'll get the chance to revisit. I doubt again this year now, with so little of it left, the weather turning cold and daylight growing short. And although jury is still out as to whether we move to Plymouth or Torquay next spring (in my mind, if not, admittedly, in Dad's), regardless of the choice, we'll probably just sail straight past Ilfracombe on the way down, intent on getting straight to Padstow or St Ives before rounding the corner.

It's almost a shame, but there is at least the comfort of new adventures to be had.
Posted by tatali0n