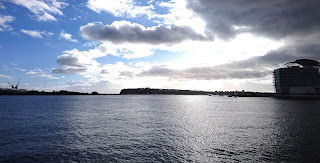 I had a gig Friday night, but the rest of the weekend free, and Nik, unusually, had the entire weekend off work to spend with me. So the original plan was to sail up to Portishead from Cardiff on Saturday afternoon, supper in Portishead Saturday evening, and sail back to Cardiff Sunday morning.

The gig went to plan. But that was about it.

November 5th is, of course, Bonfire Night here in the UK. In previous years, this hasn't caused much of a problem for our dogs; most of them couldn't care less, and those that did fret took comfort from the confidence of the others.

This year, Jack who in previous years has been oblivious, decided that this year he was going to go all barky and hyper excitable at the merest hint of a pop or a crackle. This in turn left poor Boo, not the most confident of furry souls in the best of times, feeling decidedly edgy and anxious every time Jack went off on one.

So instead of sailing up from Cardiff for supper in Portishead on Saturday night, I spent most of Saturday evening like this: 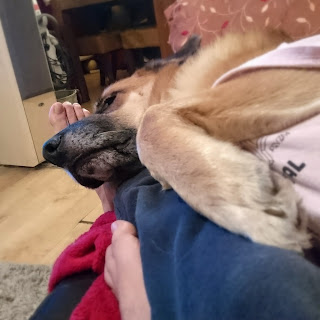 It wasn't entirely the fault of the fireworks. The forecast wasn't exactly playing ball either. It was lovely for Saturday, a fresh northwesterly set to drive us up to Portishead. But the promise for Saturday was not so great; wind increasing to 25 knots and backing more to the west of northwest.

Hardly terrible weather, especially with the sun expected to shine, but as a general rule of thumb, I don't take Nikki out sailing with us unless I can avoid it if the forecast is for more than 20 knots. Add in Sunday's spring tide of the weekend (13m range) and things had the potential to get quite lively.

I nearly broke the rule and went anyway.

Instead, we decided to have a quite Saturday night in (that is, Jack, Boo, Lilly and I; Nikki opted to leave us to it and go out to bingo, a strange, infernal game the charm of which utterly evades me) and then go down to the boat on Sunday and have a sail in the bay, behind the shelter of the Barrage, before heading over to Mermaid Quay for lunch. 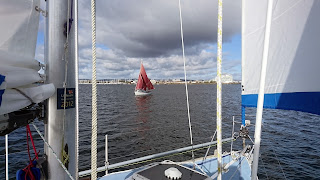 The advantage of Cardiff Bay is that it's typically flat, sheltered water, essentially a big freshwater lake. So even if it's gusting past 25 knots, it's still usually a relatively benign place to potter about under sail with the family.

There were a couple of other yachts out, reaching back and forth across the mile wide stretch of water under their headsails alone, and a charming little Drascombe Coaster called "Pintail" making a very fine show of handling the conditions. We spent a very pleasant hour in the chill autumn sun ourselves reaching from one end to the other, Dad on the helm and me coaching Nik with handling the sheets through the occasional tack. She made an initially grudging crew, but gradually warmed to her task. 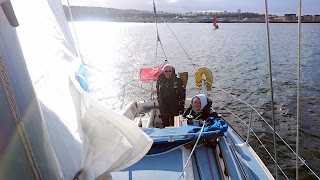 Although I kept two reefs in the main and a couple of rolls in the genoa, the conditions didn't really warrant it. The general wind speed was in the end within the shelter of the bay no more than a F3 or low 4, but the occasional gusts that blew did push into a definite 5. Having the sails reefed down made life a lot more relaxed for Dad at the helm.

I think Dad would happily have stayed out there reaching back and forth all morning, but hunger eventually got the better of us and we dropped the sails, put in alongside Mermaid Quay, and went ashore to get a late lunch at a Chinese in Cardiff's Red Dragon Centre. One of these "all you can eat" type buffet affairs, pleasant enough food within the limits of what it was but wouldn't have been my first choice. However, Dad had remembered the ice-cream machine from the last time we'd eaten there, and the lure of it was too much to resist a return. 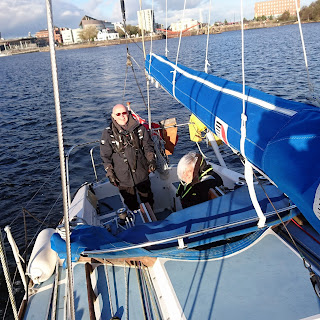 What the food lacked in quality it more than made up for in quantity. Sated, almost to the point of unconsciousness, it was fortunately only a quick fifteen minute trot back across the Bay to our berth in Penarth, managed without mishap, and then a relatively easy drive back home.

A most enjoyable way to spend a Sunday.