As hoped following the turbulent weather of the Sunday after the Holms Race, the weather had calmed down a lot by the following weekend, so Dad and I headed down to the boat in Portishead on Saturday night. An 0700 lock was booked for the following morning to return Calstar back to Penarth. The harbour master in Portishead remarked that of a number of Cardiff boats that did try to make it back the previous Sunday, more than a few had returned, unable to make any progress against 30 knots plus of headwind and accompanying seas.

Forecast was for an unusual north easterly, but only to about F3 or 4, and high water Cardiff was expected for noon, so we were anticipating an easy run.

We had heavy rain overnight (and got utterly soaked walking back to the boat from supper at a local Italian) but it had ceased by morning, and the dawn was a tranquil, understated salmon-hued affair, with clouds slowly breaking up and clearing the sky.

Another yacht shared our lock out, also bound for Cardiff. There was a slight swell beyond the lock gate with the sea being pushed in to what would be the usual shelter of Portishead Hole by the north eastern breeze, but Dad was more distracted by the antics of the other yacht, "White Knight", a small cargo ship transiting the area, presumably out of Sharpness as he was sailing well outside the Kings Road channel, and the dredger "Arco Dart" just putting out of Portbury Dock a mile up-stream to really notice.

None of them were anywhere near to being in conflict with us, but Dad remains as allergic and attentive to other boats as ever. It's not a bad thing.

Clearing the shipping channel, we soon had Calstar's sails aloft and the engine stilled. We shook the reefs out of the main, still loosely tucked in from the end of the Holms Race, and before long we were set on a down-channel, south westerly course towards Welsh Hook and Clevedon. The apparent wind induced by the fast ebbing tide put enough north into the breeze to hold us on a comfortable beam reach, the little yacht under full sail, cutting just shy of 4 knots through the water but closer to 8 or more over the ground. 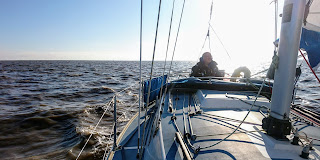 We could see a thick column of smoke back in the direction of Avonmouth, and read online that there'd been some sort of fire at the recycling centre there, requiring the attentions of about 50 fire fighters. I don't believe anybody was hurt, but for a while we could hear the distant thump of multiple explosions; I'd speculate they were tanks of some sort or gas canisters succumbing to the fire.

We made good time, the GPS log later showing our maximum speed over the ground to have exceeded 10 knots, probably somewhere in the vicinity of Clevedon and the Bristol Deep. Leaving the town of Clevedon astern we hardened up to a close reach, still pushing 4 knots through the water and with no particular pressure or heel to the boat, and laid a course for the Welsh shore and the North Cardiff buoy.

We passed clear astern of Arco Dart at work somewhere around the Middle Grounds, clearing silt from the depths of the intersecting navigation channels, but otherwise saw no other traffic, the sails of the bigger, faster yacht White Knight slowly creeping ahead of us to disappear amongst the clutter of the Cardiff shore.

As the sun climbed into the morning, the last of the clouds faded to the horizon, leaving us with a gorgeous, sapphire blue autumn sky to sail under, the chill of the fading year warmed a little by the still eager sun.

The Penarth Roads were busy, with yachts locking out of the Barrage to race and idling about off the Penarth shore. We lowered our sails and put the engine on around 0930, narrowly missed the 0945 lock in through the Barrage by the time we were settled, so loitered in the outer harbour until the 1015 finally took us up into the Bay.

It's a thought I have so often, and possible express frequently enough for it to be a cliche, but the character of the sea, and in particular the Bristol Channel, is never constant. The conditions of this last weekend were so much in contrast to those of the weekend before and the Holms race. 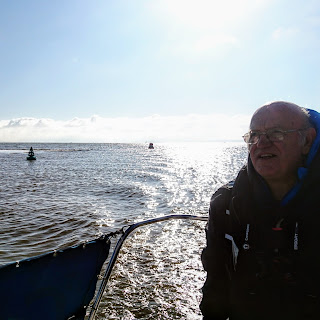 Our return back to Penarth had been sailing in easy mode. If it were always like that I expect we'd soon dull. But every once in a while it does make for a welcome respite.

Portishead to Penarth, distance sailed 18.3 nautical miles. Averaged 6.1 knots over the ground for most of the passage, maximum was 10.1 knots. It took just over two and a half hours to get across, but the actually time underway, as ever, was almost that again because of the usual complications of getting in and out of marinas and waiting on locks. 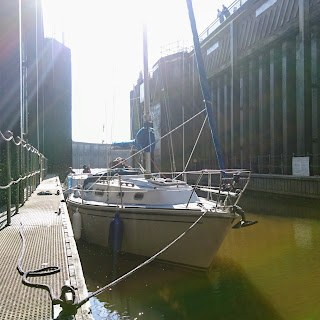 Our mate Richie of the Lydney yacht "Odyssey" kindly picked us up from Penarth Marina and drove us back to our car in Portishead; more than returning the favour of a lift we'd given him back from Portishead to Gloucester train station after the Holms Race the week before.


A tragic accident on the M5 motorway on the Saturday afternoon meant that most of the motorway between Avonmouth and Gloucester was still closed, and remained closed until Monday. It significantly complicated the drive home, but it was hard to begrudge the inconvenience of the delays, diversions and traffic queues against the trauma, heartache and loss of those directly involved or affected.

A lorry had crossed the central reservation, colliding with two family cars travelling the other way; four direct fatalities in the two cars, and a mother and two children travelling in one of them bereaved of husband and father and seriously injured themselves. It's hard to comprehend or imagine the staggering, unavoidable misfortune of something like that happening to yourself or somebody you love. It reminds us of how lucky we are, how precious life is, and how suddenly it can all change.

My thoughts are still very much with those involved. We all spend so much time travelling up and down that stretch of road between Gloucester and Bristol.