It was a painfully early start Saturday morning. On the road from 0600, delivered the car to Portishead Marina, then a combination of Shank's pony, bus and train got Dad and I from Portishead to Penarth where, after grabbing a quick breakfast at Compass Coffee, we boarded Calstar and cast off from Penarth, heading out through the Barrage and off up to Portishead with the flooding tide.

From the forecast, I'd honestly expected us to need to motor all the way; 2 to 3 knots of wind generally isn't enough to do much with the Westerly. But a combination of slightly more wind than expected, from harder on the nose than anticipated, along with our still crispy new sails meant that once we passed the Outer Wrack, the sails went up, the engine went off and the little yacht trotted happily through the water, close hauled at a respectable average of 2.5 knots.

It was an absolutely gorgeous day, the Bristol Channel at its most benign, bright sun and the waters so settled that the characteristic silt settled enough to almost fool you that they might turn green.

An easy sail all the way up, even after the wind dropped off and turned through 180 degrees as we passed Clevedon, leaving us inching our way up the last four miles with the sails goosed but the flooding tide now in full flow. 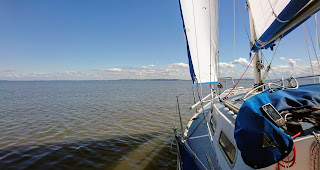 We left Calstar moored comfortably in Portishead, ready and waiting for us to join in with the Holms Race next weekend.


Sunday couldn't have been more different.

I overslept; having planned to be at the lake for 1100, I awoke bleary eyed at 1000, had a quick shower then 50 minutes of panic as I realised I couldn't find my drysuit, before giving up, grabbing a wetsuit instead and heading off down to the Club.

I still haven't found it, and have no idea where I could've left the thing. Frustrating, as it wasn't a cheap bit of kit and I've only used it through the one winter so far. If I can't find what I've done with it, I'm going to have to replace it. And I had other plans for that bit of gig money. 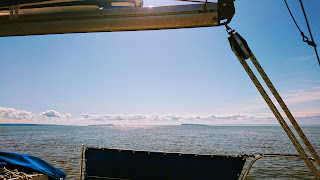 At the lake, the skies were low, angry and grey, the rain thick and merciless. With three races running from 1200, I hadn't been able to fine anybody available to crew my Enterprise "Buffy" with me so I was solo, "Billy No Mates" with a double-handed boat and a handful of weather to deal with.

The wind was gusting up to 26 knots through the first race. Two capsizes, both through my own clumsiness rather than the fault of an absent crew. The first was ten seconds before the start, when everything had been going so well, tacked, and accidentally locked the now lazy jib-sheet back into it's cleat. I saw the mistake, tried to get back across to free it, but too late and could only vault over onto the centreboard as the boat bowled over, losing any chance of a good start, but at least keeping myself dry.

Two laps later, boat finally clear of water, and we were flying along. Heading into the windward mark, hot on the tail of Geoff in "Ghost", picking my way through a scrabbled of Solos, a gust hit and I hiked out hard to try and keep Buffy flat.

And missed the toe-straps.

A perfect back-flip off the windward gunwale of the now hard-heeling Enterprise, I hit the water like a rock, popping back up indignant and spluttering. Almost got run down by an overtaking Solo, I was still holding the tiller extension and mainsheet, being dragged along behind, trying vainly to steer the boat from the water. I let go of the former before I twisted it off the tiller, but kept hold of the mainsheet to stop the boat sailing away without me, capsizing her so that I could finally climb up on the centreboard, right her and get back in.

The capsize recovery was quick, as always, but a boat full of water for another lap meant that although I clawed my way back through the rear of the Solo fleet before the end, I never regained the lead on them I needed to beat them after correction for handicap.

So an inglorious last. But nothing broken, except perhaps a slight denting to my pride, and it was fun.

The second race I redeemed my earlier performance by taking a respectable 5th place out of the 14 boats racing, to my delight soundly beating Ghost. The third race saw me drop back though, 7th out of 10, with Ghost soundly thrashing me, which to be fair, happens more often than not.


Not really sure what to expect weather-wise this coming Wednesday evening, but looking at the forecast has scared me witless for the Holms Race next Saturday. I really hope it moderates a little as the week wears on. I don't really want to deal with a F5 gusting 7 out in the Bristol Channel. Must be getting old or something.

A week next Wednesday looks like a bit of fun though; F6 gusting 8 is an entirely different thing on the lake. As long as I can find crew to sail Buffy with me!
Posted by tatali0n