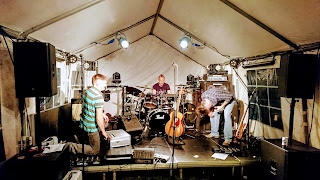 Saturday night's gig was an outdoor affair. So it was a little unfortunate that Friday's wet weather persisted into the weekend. 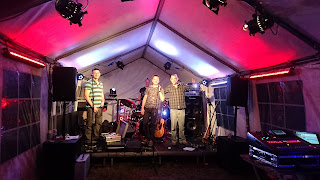 The stage did enjoy the shelter of a well-founded marquee tent however, and the audience were variously camped out in the park all weekend or running around in circles for the duration, so seemed oblivious and to the discomfort visited upon them from the heavens. 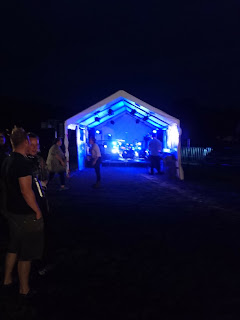 I should probably explain. It was an running event where the enthusiasts were trying to clock up 100 miles in 24 hours running around the grounds of Cirencester Polo Park in the grounds of the Bathurst Estate. We were a side-show to distract them between heats and to keep their friends, family and sundry supporters distracted whilst they ran.

Running is an obsession I've never truly understood. I've tried it a few times. I think, academically, I can just about grapple with the lure of it, but emotionally it just doesn't connect with me. I say that completely without prejudice or judgement; I have plenty of my own obsessions that probably defy the understanding of other folk. Getting tossed around in a small boat, often wet and miserable and at the complete mercy of the elements is one such interest that springs to mind.

However, I can recognise and do admire commitment, drive and passion. And those people running around and around a muddy park on that damp, miserable Saturday night clearly had that in spades.

So whatever floats your boat. It was a pleasure and a privilege to play at their event.

Favourite line of the evening: "Please don't take this the wrong way, but you don't look much like runners. You must be the band?"

Runners or not, I have to say that by the end of the evening my own calf muscled had cramped up in sympathy.