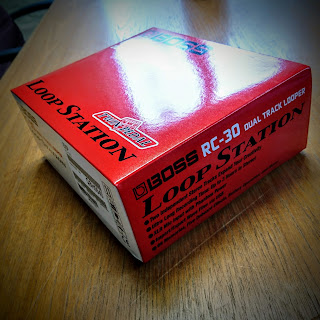 I normally hoard my gig money like a modern day Silas Marner. It's a funny old thing. The money I make from the band is, typically, a mere single percentage of my annual income when set against my "day job" but there's something visceral about simple, grubby cash earned directly through hours of (occasional) blood, (unavoidable) sweat and (inevitable but thankfully infrequent) tears that is essentially lacking in the more ephemeral quality of a monthly wage digitally transferred directly into a bank account in return for unquantified hours of work sat at a desk in an office.

That, and I don't see the latter. I only enjoy the effects of it, in the roof over my family's head, the food on our table, the clothes on our backs. Granted, I'd very much miss it if it wasn't there.

Or if I didn't, Nikki would very quickly note the absence for me.

So the gig money collects into an envelope that I hide away, occasionally bringing it out to count it and add the last gig's takings to it. Silas Marner eat your heart out.

I don't spend it frivolously. I've previously bought the odd boat with it, a guitar or two, most recently it went towards a much needed replacement of my ancient home PC with something a little more current. It's often kept aside for holidays or weekends away. Like the two weeks holiday I've got coming up at the end of the month.

Except for yesterday. I bought a new toy for myself: a BOSS RC-30 Loop Station. It essentially samples sound, from an instrument and/or a mic, and then loops it back to you so you can add layers on top and create music. It's not exactly a new idea; I took my daughter to see Imogen Heap at the Bristol O2 back in about 2010 (who, I should add, has an absolutely gorgeous voice matched only by her technical ingenuity and imagination), and the likes of Ed Sheeran (who writes the occasional half decent tune that then gets played to death on air) has since made the concept pretty mainstream, to say the least. But the technology has much improved in recent times, making it significantly less technically complex and more affordable; a quick search reveals you can pick up a simple, budget loop pedal on eBay for about £35.

A friend (the kind of friend you've met through the Internet but haven't yet met in person; I shall have to remedy that, although in this case I have sailed with her lovely husband a few times AND held his not so lovely pet scorpion "Sting" in my hands) mentioned that they'd bought a BOSS loop pedal after seeing one used at a folk festival recently which triggered my curiosity (thank-you Janice) which in turn triggered an "I must have that" which in turn has resulted in the little hoard of cash under my floorboards taking a bit of an unplanned dent and a box turning up on my desk this morning containing a new toy for me to play with (thank-you Amazon Prime).

I could kid myself and pretend it's for the band, but I doubt I'll ever actually get to the point where I'll use this live on stage. It's just for me.

Needless to say, I'm actually quite excited.
Posted by tatali0n