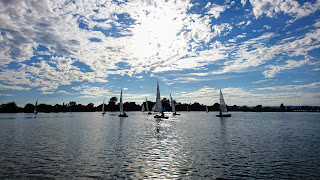 Wednesday evening was my turn as to run the race committee as OOD (an abbreviation of "Officer of the Day" for the uninitiated) on the lake at Frampton. This essentially meant that rather than sailing I had to take my turn to supervise the safety boat, set the course, run the race, calculate the results, supervise the after race bar and then lock up at the end of everything.

We each get a couple of these duties a year, plus Ben and I get another one for being daft enough to win the Boxing Day race, or was it the New Year's Day? Or perhaps we placed in both? I forget.

They can be quite arduous in certain conditions. My next one is a Sunday in late November so that's really not going to be quite so comfortable. Last night though was a lovely, balmy summer's evening that's proving to be quite pleasantly typical this year.

There wasn't much wind though, and what little we had was shifting about all over the place.

The last time I was OOD in conditions like this, I set a very short lap with lots of cross-overs in the course to try and keep it interesting for the racers in what looked like an hour that would prove to be a slow drift.

Then the wind filled in just as the race started, and the average lap time dropped to something like three minutes. They all had great fun, I was later told. Life on the committee boat though was absolutely manic. You've got to record everybody's relative positions in up to three separate races running at the same time on every lap they do. When the lap time is the typical 15 to 20 minutes, that's not so bad.

When that time reduces to about 3, your AOD ("Assistant Officer of the Day") to whom you've delegated the scribing duties grows to hate you very quickly.

Not wanting to get caught out like that this time, I used the full lake to set the course, trying my best to get a couple of good, long beats in, a reach and a run.

The little bit of wind we had held as I set up the starting sequence and cleared our three racing fleets over the start line. The first beat worked a treat, the handicap fleet cleared around the windward mark ahead of the small Laser fleet and the more numerous following Solos.

Most of the boats cleared the first lap in 20 minutes. The slowest handicap, a Mirror dinghy, took a shade over 30. Not unreasonable, so I let him carry on through without shortening the course, planning to finish everybody with a two lap race.

Then Wednesday night did it's usual trick and what little wind we had, for want of a better word, stopped.

The vast majority of boats made it back through, their lap time increasing but still finishing within the hour. The poor Mirror however, and one luckless Laser sailor, did not. The Laser finally crossed over the line a few minutes ahead of the Mirror, but the Mirror's second lap took him 57 whole minutes to complete.

We could've called it. If you can't finish within 20 minutes of the boat ahead of you (or is it the leading boat? Can't remember) then I think you can technically get scored DNF ("Did Not Finish" - we like our abbreviations in sail racing) but the two of them were grimly determined to valiantly push on and finish, so who were we to begrudge them the chance?

In any case, it was a lovely evening for relaxing out on the water, watching the little boats drift about the glassy lake. Unless you happened to be the greenfly that the dragonfly decided to make a supper out of, settled oblivious to us all upon the back of my hand. 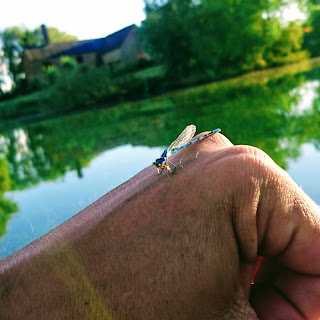 So we let them finish, both the Mirror and the Laser, though I shoed the dragonfly away once I'd got bored of watching him sup, packed away the committee boat and gathered up the racing marks, then towed the Mirror back in.
Posted by tatali0n