A great night at The Greyhound in Longlevens, Gloucester last night. The place was packed, the crowd excitable, folks dancing on tables, and walls and, without prejudice, the floor if there was room. 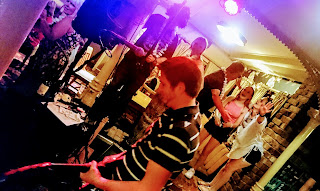 Looking forward to going back again soon. Really good that between here and The Pilot in Hardwicke, we've finally found a couple of great places to play again close to home.

It's now the morning after, and I've just finished my breakfast; a large mug of tea and a mushroom omelette. No sailing today. Instead, we're off to Gloucester Cathedral to see our occasional keyboard player (and, not entirely by coincidence, also my brother-in-law) frocked, or collared, or whatever the term is when the C of E put a black dress and a dog collar on one of their devotees and re-title him "Reverend". 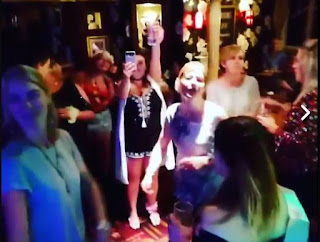 I'm being flippant. This morning, Jim is getting ordained as a vicar, something I've watched him striving towards for many, many years. Always good to see someone's hard-sought ambitions realised. I hope the journey that is sure to follow is as interesting and as varied and as fulfilling and as fulfilled as he has surely dreamed it'll be, and proves to be as great an adventure as it has been for him to reach this moment now.

All of the above snaps were taken last night at The Greyhound. I'm going to finish this with a picture from another gig, back in 2010. Not sure where or exactly when, but it's an old photo of the man himself, the Rev James to be. 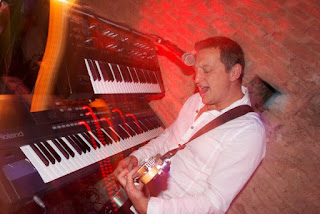 Wonder if he'll be wearing a dog collar next time they let him out to play with us again?
Posted by tatali0n