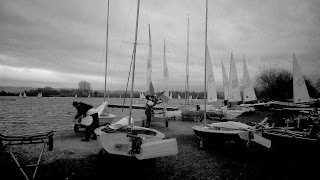 The second race proved to be the worst of our series, so we can write that one off. Very variable, gusty, nasty wind, but at the end of the day it was the same for everybody.

Not entirely sure what went wrong. We struggle above F3 and lack practice dealing with heavy weather, and I think that shows in our speed. We didn't seem to point anywhere near as well as the other boats either,  which I think is what really did for us.

I think that's the sail trim. Might be wrong, but if I had to lay a guess....

So we now sit second, with two Lasers either side. In the end, it wasn't Mike that passed us, but Pete and by a couple of points. Mike is now trailing is by three points, but his worst result is a 10th whereas both Pete and I have a 6th.

The Comet is out of the running.

So one races to go. A pursuit, which is good as it means we race each other rather than the clock.

To beat Pete, I need to beat him on the water by two places in better than 4th. To catch me, Mike needs to finish better than 6th and beat me.

Smart money is on the Lasers, but anything is possible. Will be watching the forecast for next Sunday with keen interest.

We're still in it.