Blowing dogs off their leads 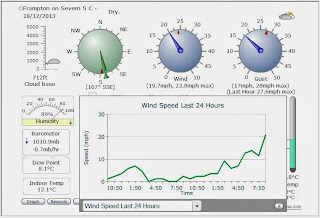 I awake at 0730 to a small blond dog industriously licking my left ear
and the wind howling outside like a forlorne banshee. There is a tree
outside my bedroom window that often tells me what the wind is doing
when I first open my eyes, but the position and build of our house is
such that I rarely hear it howl. On the other hand, it's not unusual for
one of the dogs to sneak up onto the bed after my wife gets up in the
morning. It is slightly unusual for it to be Boo though.

I like the sound, of the wind howling that is, not Boo's slurping, and
think it's going to be an interesting drive in to the office.

It isn't. Up over the ridge of hills that separate Gloucester from
Stroud and an hour later I'm sat in my office. It's dull, damp and flat
outside my office window, the trees barely moving in the shelter of
Chelford Valley.

A peek at the Sailing Club's website, and the southerly wind has blown
rain directly into the face of the webcam, turning the lake into an
indistinct blur. The weather station shows things are still very lively
on the other side of the hill however.

The old folks of the Club have a Wednesday afternoon series through the
winter. Actually, it's not restricted to old folks as such, but by
accident of its timing you have to be retired or otherwise not chained
to an office to be able to sail in it. They are going to have some fun
today.

Wish I was sailing.
Posted by tatali0n