My brother jetted out to Indonesia with his wife a couple of days ago to visit her family out there. He's not back until the end of the month, and as he's also the bassist in my band, that means I have the whole month off.

So many evenings and weekends and weekends. Had thought to spend the next couple of weekends on a farewell tour of the upper Bristol Channel; perhaps Watchet this weekend, Portishead next. The tides were good for it. Dad seemed up for it.

The weather isn't playing though.

So as far as Watchet and Calstar are concerned for this weekend then, it's no go. I shall have to find something else to do with my time.


Talking of snow, it pelted down thick and fast this morning. The view from my office window: 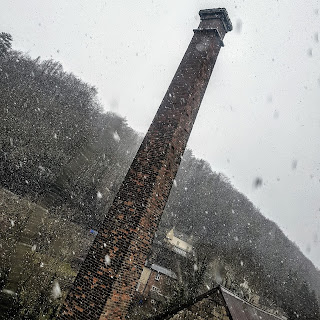 Thick and fast and very wet though. The temperature has, from a chilly start at the beginning of the week, warmed back up to above freezing, and the ground was very wet so it didn't have a chance to settle. And it was brief. By the afternoon the sky was blue between the low scattered, torn and racing clouds.


I stumbled across the blog of a couple that brought a small Westerly and sailed her around the UK back in 2013: leoslatsandlongs.blogspot.co.uk.

I was actually looking for information on the Eddystone Lighthouse, which sits about nine miles off the shore of Plymouth, and came across an account of them sailing out and around it.


I wasn't so interested in the "Around the UK" bit, though I'm sure it makes interesting enough reading, but more drawn by the photos and accounts of their sailing in and around Plymouth, for obvious reasons.

Coincidentally, and quite amusingly in a way, when they first bought their boat it was in Portishead, so they made the decision to relocate it to Plymouth, despite being Bristol based themselves, for amongst other reasons, "the sailing's much easier " and "it's closer to France".

Similar reasons to our own then. Sort of.

They had originally planned to sail the boat around, and had engaged a professional skipper to assist them; a not unsound decision given the waters they were going to have to pass through and their lack of experience. So I eagerly scrolled though these historical posts hoping to read an account of the passage I so wanted to make myself but am now going to be denied .....

They're quite keen with their camera, so I was anticipating lots of photos.

...... Only to read that in the end the weather beat them before they even got started, so they put her on the back of a truck and had her transported down.

Again, similar reasons to our own then. Sort of.

It looks like the authors concerned, Steve and Chic of the Westerly Pembroke "Leo", stopped updating the site once they'd finished their circumnavigation of the UK in 2014. I wonder if they carried on sailing?