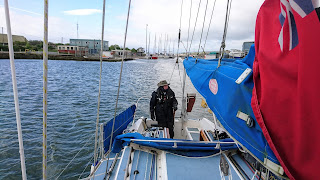 Once we were into Sharpness, the next 14 miles (actually, as we're now technically inland, I guess I should refer to distance in statute miles - 16.5) or so were relatively straight forward, with no 10m tidal rise or 6kt streams set against us to worry about.

Of course, there are the nineteen bridges to navigate, if you include the two that guard the exit from the dock basin in Sharpness that, to be fair, most typical users of the canal wouldn't have cause to pass through. 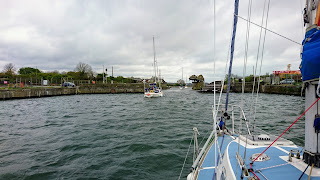 There is also a considerable amount of traffic. Admittedly, much of it is moored on the side of the canal, but, especially given a following wind, the effects of prop wash are suddenly amplified in the narrow confines of the canal when you're trying to hold station whilst waiting for one of the innumerable bridges to swing to let you through. 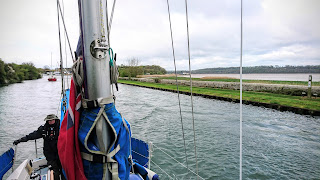 The views are pretty. The canal often runs above the surrounding countryside, and for the first few miles parallel to the upper reaches of the Severn Estuary above Sharpness, the Noose and the birthing place of the Severn Bore. A place "yachties" like us don't sail. Except I've sailed there.

I love that stretch of water. Wild. Untamed. Unpredictable. Unforgiving. 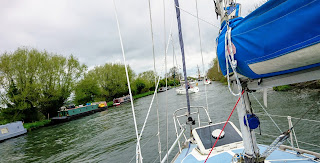 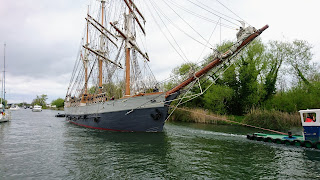 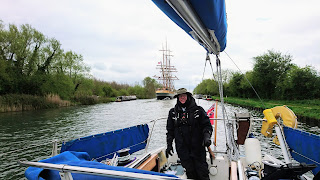 Dad gets a bit possessive of the helm when we're on the canal. Whenever we drop sails and engage the engine I always defer the helm to him and tend the lines. It makes sense as I'm the more nimble of the two of us and better suited to any necessary jumping around or fending off.

This habit transfers to the length of the canal also, albeit there is much less tending of the lines and fending of the hull for me to do.

It does mean I have 16.5 statute miles of not much to do. 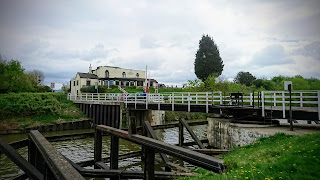 By about 1400 we were beginning to flag. We'd reached Sellars Bridge, over which a pub called The Pilot can be found. This is the same pub the band has played a couple of times; Dad's house is a five minute walk from here, which makes for a bit of an odd feeling to have travelled so far only to have come back home.

We stopped for a beer. It was a very quick beer; we thought that the lifting of Netheridge Bridge a couple of miles further on was booked for 1630, but the bridge keepers at Sellars told us as we crossed over their bridge to reach the pub that it was actually 1500.

So it was a swift pint and a brief stop. 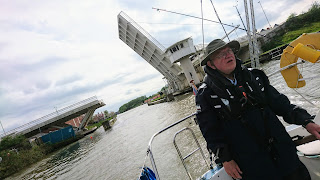 There are three final, significant bridges that ward the entrance to Gloucester Docks. Two of them are modern additions, built in the last ten years to route the bypass around Gloucester City itself, and so carry significant amounts of road traffic.

Our quick pint at The Pilot had separated us out from the cluster of yachts we'd sailed up with, so we came alongside the bank for a short while to wait on Netheridge bridge. With one remaining yacht behind us, we had to wait for them to catch up so we could move through as a pair. 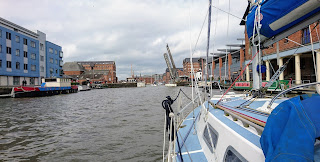 Once through Netheridge, we found our friends Tess and Chris of "Monterey" moored up on the bank before High Orchard Bridge. They had been with the group ahead of us, but on the first attempt to lift High Orchard for them, the bridge had, for reasons unknown, failed to fully rise.

Second time lucky, the bridge rose up to its full clearance, giving room for Monterey to slip beneath it with us. Watching it gradually creep up was a tense experience however. Although perhaps not as tense as it'd be the following Sunday waiting for it to lift to let us all back out again.

Friday night we ate with friends from the fleet at the nearby Ship Inn. And drank a not insubstantial amount of beer.

The following morning, Dad and I walked into town and found a taxi to take home. Dad's plan was to walk Bruno and then walk back into town to have supper at one of the Dock's restaurants with the rest of the PCC fleet and spend the night on the boat. 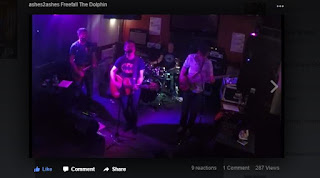 And me? Typically, I had mismanaged my diary so had a gig in Bristol to get to. Afterwards, I went home to bed and then got a lift back to the boat from Ben on Sunday morning, ready to head back down to Sharpness in preparation for the lock back out on Monday morning and the long trip back down to Cardiff.