Calstar: a few photos from the weekend's travels

Friday night. Headed down to the boat with Dad & Nikki. Supper at the restaurant in the old Customs House, then back to the boat to accidentally drink the best part of a bottle of rum with Dad.

Nikki meanwhile finished stitching up the new covers for the front cabin bunk cushions. Over the last few months she's reupholstered the lot of them for us. Don't ever let her say sailing with me is boring. 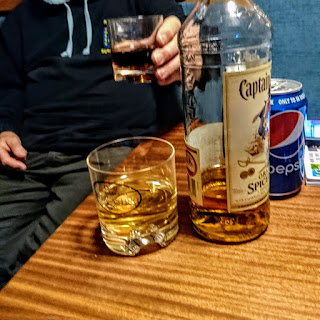 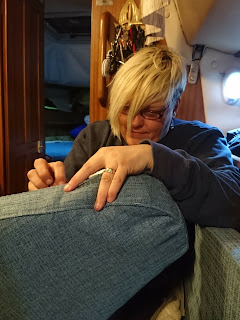 Saturday morning,got up silly o'clock. Locked out through the Barrage and started punching the tide in the direction of Watchet. Sunrise at first gave every impression it was going to be something of a dud, which was a disappointment as it was my birthday.

And then, just as I'd about given up on it, it went all pretty on us. Such a tease. 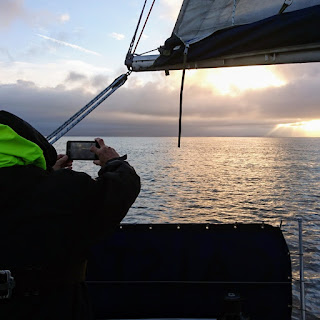 Motor-sailed all the way to Watchet. Tide pushed us hard up close under Steepholm before it slackened enough for us to make any decent way against it.

Easily made the gate for Watchet though.

A couple of soluble paracetamol in a half bottle of water cured the vestigial traces of a hangover before we made harbour. 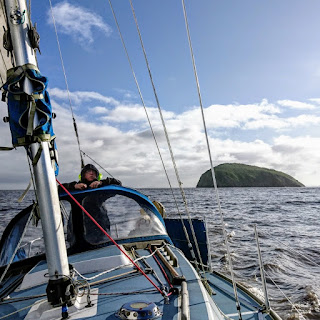 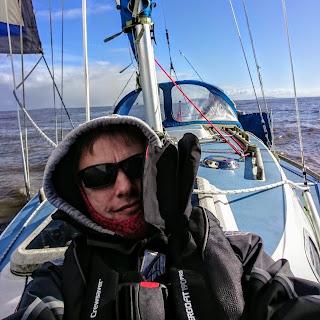 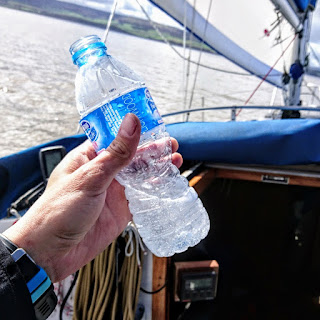 In harbour, we took a steam train to neighbouring Minehead. Sent Nikki to wander around the shops, whilst Dad and I ambled over to the harbour for a look.

Nik enjoyed her wanders, but didn't buy anything. Dad bought another tee-shirt from the RNLI shop by the harbour-side. 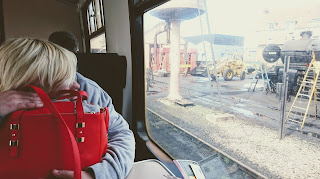 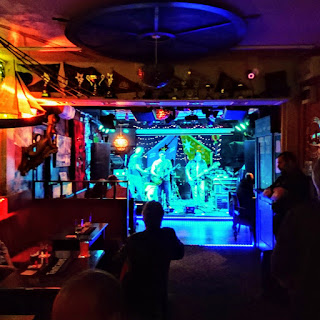 That evening we caught a band at the Esplanade Club, a bar overlooking the marina, then had supper at an Indian restaurant. The food was good; I love Indian cuisine, very fond of spice, but wouldn't normally eat it whilst away on the boat. However, figured the following day we were heading home, so there wasn't much harm in it.

Got away with it. Just.

Ironically, as it was my birthday, the band we caught earlier in the evening was called "Mid Life Crisis". Always nice to see somebody else working a pub gig. The taste, style or quality of the music and performance don't really matter much to me, I find the spectacle fascinating. Very rarely get the chance though. If I'm in a pub, it's usually me playing.

Sunday morning, the gate dropped a shade after 0830, but we didn't lift out of the mud of the silted up marina until just shy of 0900. Wasn't expecting much wind, but there was a brisk westerly blowing as we left the harbour, so put the sails up, stilled the engine and had a fantastic hour's worth of lovely sailing until it eventually failed on us and we had to switch the engine back on. 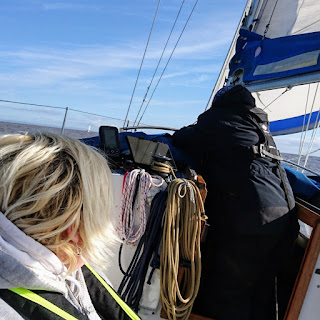 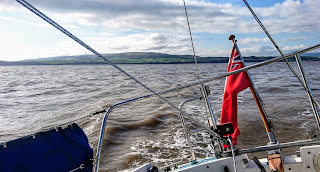 Dad could've been persuaded, but it was clear that he'd much prefer to make the return on the one tide as we had a 90 minute drive home to look forward to once we were back in port.

The trip back to Cardiff covered 19.1nm and took 3 hours and 35 minutes, 1 hour and 15 blissful minutes were under sail.