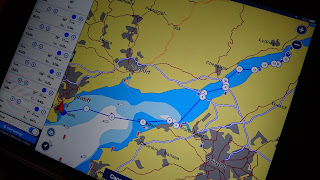 A friend of mine, plays drums in our band every so often and is a fellow yachtsman, did comment the first time we did this words to the effect of why on Earth would you want to take a seagoing vessel all the way up an inland waterway to Gloucester? Not an unfair question, and I could understand and, to a degree, share his bemusement. The simple answer is that Dad wanted to do it. And for me, it was a fresh challenge and an interesting, tricky piece of navigation. 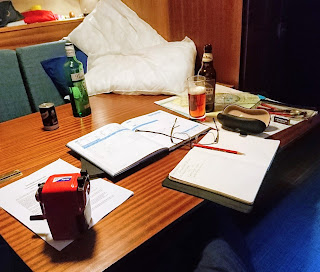 We're no longer members of PCC. I found that keeping in touch and current with a club that was almost an hour down the motorway and primarily organised itself and communicated via the Clubhouse bar on a Wednesday evening was difficult, especially as I race Buffy at Frampton on a Wednesday evening. And Calstar is now based down in Cardiff. But we're still friends, and when we discovered a couple of weeks ago that they were planning another trip again this year, we smiled winningly (and metaphorically) in their direction and they kindly invited us to tag along.

Being in Cardiff, a further 18 miles down-channel from Portishead, presented some additional challenges this year. 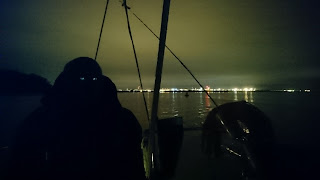 High water Sharpness on the Friday was due 1040. The fleet needed to be off Sharpness ready to lock in an hour before. Any earlier would be too early on the tide, more than half an hour later would risk missing the lock. The Portishead fleet were planning to gather outside Portishead between 0730 and 0800 Friday morning but my work commitments prevented us from doing the obvious, splitting the trip across two tides and coming up to Portishead Thursday evening which a few other Cardiff boats were planning to do. 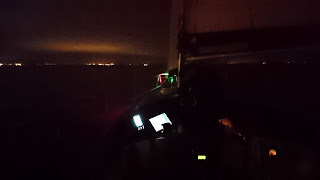 We can cover the 18 miles between Cardiff and Portishead in three hours, but that's will the full spate of the tide carrying us. Without that, it can take four and a half hours to cover the same ground.

Low water Cardiff Friday morning was 0345 at 1.3 meters. The low water height would mean that the outer harbour at Cardiff wouldn't carry enough water for us to get out for about an hour either side of tide. So the only option available was to lock out a little over an hour earlier at 0230 and stem the last of the ebb. 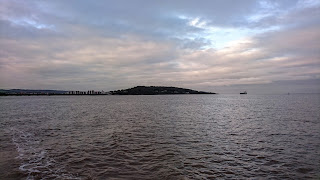 By the time we got to the boat Thursday evening and had settled in and bunked down, I managed a shade over a couple of hours of sleep before I had to crawl back out of my sleeping bag at 0200 and rouse Dad to prepare the boat to cast off. At 0230, the Barrage lock was an eerily dark, lonely place as we locked down about 10m to the awaiting sea. A near to full moon, although riding high, was obscured completely behind a fully cloud-mantled sky. Flashes of green and red from the navigation buoys guided us out through the Wrack Channel as we left the lock and departed from the outer harbour, one nervous eye glued to the dim, amber glow of our depth gauge, keen to avoid the indignity and inconvenience of sitting out the last of the tide on a mud-bank.

A light breeze was pushing up-channel with us over a lightly ruffled sea, so as soon as we were clear of the Wrack, we turned into wind and pulled the sails up, but continued to motor-sail for the first couple of hours through the darkness, first to make way against the still ebbing tide and then to keep our ground-speed up in the light air until the tide fully turned and picked up the slack. 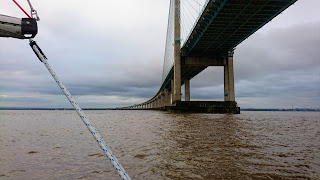 Some time later, off Clevedon and about an hour out of Portishead, wind and tide strengthened in our favour and we finally stilled the engine to glide through the darkness with just the rush of wind and chuckle of bow wave and wake for accompaniment. Sunrise was little more than an apologetic, grey seeping of light into the cloud-raddled sky as we passed Black Nore Point and Kilkenny Bay. We made Portishead for about 0700, anchored off to wait the rest of the fleet and Dad grilled some bacon for breakfast.

We weighed anchor at 0730, as the first of the Portishead boats locked out. The smaller boats set out directly, whilst some of the larger, faster vessels milled around in the shelter of the Hole. A preventer rigged to the main and the headsail poled out in a goose-wing, we set off ourselves on a run towards the Bridge. The wind had freshened, and within half an hour we were up in the top of the Shoots, fast approaching the bridge. A forest of masts marked where the Portishead fleet were just now pushing out from the shelter of the Hole to start making their way up.

We turned back to them, hardening up to a close-hauled beat to stem the tide, waiting for them to catch us up. 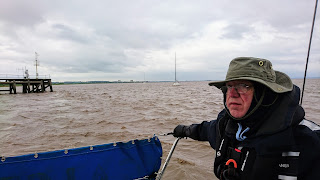 We passed beneath the Second Severn Crossing under full sail in the company of the leading Portishead boats and continued up between the bridges, the wind becoming fickle and shifty as the early morning lengthened. As we passed the moorings at St Pierre Pill, some of our Lydney friends aboard the yacht "Castiard" put out into the channel to join us on their way home to Lydney Harbour. Once through the second of the Severn bridges, we turned briefly into wind, started the engine and dropped the main, but left the headsail set to motor-sail for a while longer as we began to pick our way up the Slime Roads. 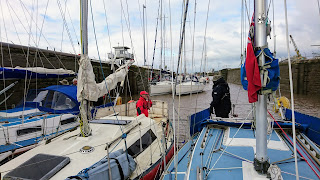 Our Gloucester bound fleet was made up of fifteen boats, most from Portishead but a few, like ourselves, out of Cardiff. Fifteen boats plus Castiard made that stretch of the Severn an uncharacteristically popular spot for a brief while that Friday morning. 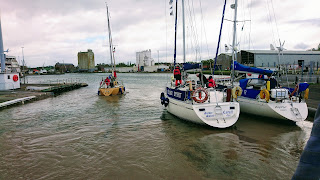 Navigation through the upper reaches of the Severn Estuary is involved, and undoubtedly perilous if you get it wrong, but not difficult or complicated as long as you prepare and follow the well marked channel. We arrived off Sharpness a little before 1000 as planned and made our way directly into Sharpness Lock, where we rafted up with a couple of Portishead boats and waited to be lifted up to the canal.
Posted by tatali0n