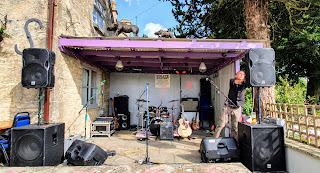 We were blessed in that we actually had a couple of gigs come through for us in September. The first was in the beer garden of a village pub in Chalford, just down the road from here. Lovely crowd, spread out on picnic tables across a spacious garden, warm sun, a gorgeous afternoon.

The following week was a quite different vibe. The skittle alley of a Bristol pub, limited tickets in advance, a necessarily small but enthusiastic and supportive gathering of the band's friends. It was a terrific evening.
We had hoped to do it again in October, but a couple of days after the skittle alley gig Bristol City put the kibosh on any live performances whatsoever and that was that.

We have a couple of dates left in December that haven't officially cancelled yet, but I think it's now safe to say that they won't be able to go ahead either. So the final tally for 2020: 48 gigs booked, 15 shows played, 33 cancelled.
Against the horror of the whole pandemic, what amounts to little more than a paid hobby frustrated is a small thing. And at least it's left a lot more time at weekends for messing about in boats. We have a dozen bookings for next year already, some carried over from parties this year that had to be postponed. But half of those dates fall before April, so it won't do to get our hopes up too much just yet.
The blackest thought, and I don't just mean for the band, is that I can't see an easy way out of this from here, for any of us. But there's no point dwelling on that. All storms blow through. It is what it is. But the sooner we can see the back of it, the better.