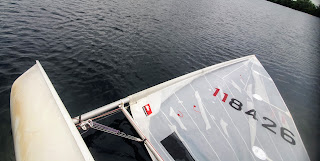 Racing restarts tomorrow at South Cerney. It started again at the beginning of the month at Frampton, but the weed there is horrific again this year, which bothers me not a bit, but it means also that the snails will be too.

That bothers me a lot.

Frampton dosed the water with bales of barley straw in the margins again earlier this year. It solves the blue green algae problem, sure, but I'm certain it's also hugely exacerbated the weed issue. And weed is a problem in almost every lake this year, including South Cerney. But at Frampton weed is in a class all of it's own. You can almost literally walk out and picnic on it.

Simple fact. You can't dump a mass of organic matter into the margins of your lake and leave it to rot, and not expect the resulting decay to feed the plant-life. Simply biology. Or chemistry. Or something.

It's a shame, because I loved racing at Frampton. But the microscopic killer tadpoles scare me. And scarred me, for that matter.

The Laser however is now at South Cerney, and I think there she'll stay. We still can't sail double-handers unless your crew is in the same household, so the Albacore still sits forlorn on the shore for now.

But tomorrow I shall race the Laser.

Hopefully she won't end up like she did a week ago last Wednesday. Which was when I took the photo at the head of this post.
Posted by tatali0n