Racing started again properly at South Cerny on Sunday. Two races, a pursuit at 1100 followed by a general fleet handicap at 1200. Conditions were boisterous. Turnout wasn’t massive, seven boats for the first race, five for the second. Kind of perfect for the circumstances, really. 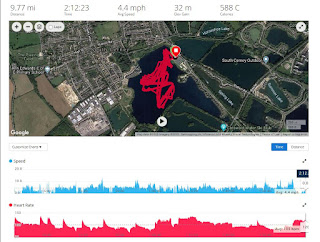 Playing around at the lake last Wednesday, my tiller extension parted company with the universal joint. So I spent an evening in the week mixing up some epoxy and reacquainting the two.

Clearly I am not very good with glue. Launched off a gusty lee shore twenty minutes before the start of the first race, after the first tack the tiller extension came away again. Limped back into shore, landed, capsized the boat on the edge of the lake to keep her safe whilst I ran back to my kit back to grab some tape. Secured the universal joint back in with a combination of gaffa and electrical tape. Ran back down to the shore, re-righted the boat, secured the extension back in place and relaunched.

A pursuit race runs on the idea that the slower boats start first and the faster boats chase them. Everybody gets a starting number based on their boat’s handicap and when that number disappears, you start. I’d checked, and the number for a Laser was 117. There is a board on the shore that counts down, dropping one every thirty seconds. For a pursuit, I always work back so I can set my watch and go by that. So if I need to start when 117 drops, I know that when 129 comes up on the board I have six minutes, 127 five minutes, 125 four, etc.

Relaunched, extension now holding together, I glanced at the board and saw the count was 120. The numbers dropped, I crossed the start line, far from perfect, but not too late I figured. A very good first beat, nice lift on the starboard tack. Lots of weed, but nowhere near Frampton style "get out and picnic on it" stuff. Clear the boards, halfway up the beat glance behind and wonder why the other Laser started about a minute late.

Then it dawns. The number dropping was 119, not 117. I started a whole minute early.

Spitting and fuming at my own stupidity, I bear away and run back down to re-cross the start line. The race is pretty much lost at this point. But at least the tiller extension is holding together.

By the time I’ve restarted and made my way back up to windward, the rest of the fleet were almost a lap ahead. But then, to compound first impressions (keep in mind I’m still very new to this club, and have never officially raced the Laser here before) I round windward, bear away on to the run and then halfway down get caught in a gust, wobble plaintively for a few more meters and then death-roll the boat. If there is any mitigation, I did manage to vault over the high side as she went over, pull the dagger-board back through then slide over and onto it, staying completely dry even as I weather-cocked the boat into wind and levered her back upright.

It would’ve looked really impressive. Really, well for want of a better word, practiced. I'm not sure if being practiced at capsize recovery is really something to be proud of however.

And sitting in irons battling for the next thirty seconds to get the boat off the wind and sailing again however would’ve looked anything but.

I redeemed myself a little in the second race. Sat exactly where I wanted on the line for the last thirst seconds before the start, held position until the last few seconds before the gun and then accelerated away into the space to leeward I’d jealously guarded from the other boats who were all queueing up now behind me. A textbook start, I was really quite proud of myself; even more so when I rounded the windward mark and everybody else was still struggling up the last third of the beat.

I lengthened my lead over the rest of the lap, and then completely squandered it on the first beat of the second. The wind dropped and badly headed me, but I was blocked from tacking on the shift by a long bank of weed to windward. The rest of the fleet came around the leeward mark just as the wind shifted back, and I now had to tack into a header to keep within the leyline of the mark. By the time I rounded it, a Europe and a Solo were both snapping at my heels.

The rest of the race was a slow war of attrition as my initial lead eroded,. And then on the final lap, struggling up the third beat in the grip of another nasty gust, both the Europe and the Solo finally snuck past. The reach that followed back down to the finish line was the fastest, most white-knuckled ride of the race. I eased back ahead of the Solo, recovering my dignity if not my place, allowing for our relative handicaps (Solos are slower boats, I have to beat them by a bit of a stretch). The Europe thrashed me, fair and square.

It was a great day’s sailing though, loved every minute of it, even the bad ones.

I’m guessing the gusts were up in to the low 20’s. And I think it’s fair to say that with a Standard sail on a Laser, I’m completely overpowered upwind when the wind hits that level. So I’ve bitten the bullet and ordered myself a Radial rig today. It was never that much of a problem at Frampton, but South Cerney is a bigger lake and a bit more exposed.

I don’t know how much use I’ll get out of it, but there have been definite times over the last few months when I’ve really wished I had the option. I’ve also treated myself to a new carbon fibre tiller extension. I could fix the existing one with a little more glue, and shall, but I want a spare. If the gaffa tape hadn’t held on Sunday it would’ve cost me the day.

Finally, just to add to my woes, as I was putting the boat away I noticed the bottom corner of the trailing edge of my dagger-board had broken away again. It had snapped previously, about eighteen months ago, which was when the above photo was taken, and Dad had pinned and epoxied it for me as I’d managed to recover the broken piece. This time the stray corner was still somewhere out in the middle of the lake. I’m not sure when it happened; sometime after the first race. Perhaps clearing weed from the board, or perhaps I was just too slow removing it when landing back on the lee shore, although I don’t remember grounding at any point.

Sunday just was a bad day for glue all round, I guess.

Never mind. My friend Paul from CS Boats is going to repair it for me. He did such a fine job of the Albacore (that I’ve hardly had a chance to sail since, but that’s not his fault) and his rates are very reasonable, so it seemed silly not to ask him and a bit rude not to put the work his way. I’m away with Dad and Calstar for the next two weeks as of Friday, but I’ll leave the board in his boat after sailing this coming Wedndesday evening, and he promises he’ll have the board repaired by the time I get back.