The Wednesday evening racing is done for the year. Actually, it's been done for more than two weeks now, but this is now the third Wednesday evening that I'll find myself at a loose end, and my weeks feel strangely adrift without the pivot point of a mid-week evening sail to anchor them.

I hadn't intended to compete in the Laser fleet. In my absence, they seemed to be getting on fine without me. The Autumn Class series is a set of seven races, of which you have to sail four to qualify. I sailed the first two, but then missed the next three; a week away on Calstar, a Wednesday evening racing the Ent with Amanda, which had been the original plan all along, and then a funeral to attend.

In my absence, Mike won all three races and was sitting pretty at the top of the results table.

Then Amanda had a migraine on Wednesday 11th, so despite intending to race together that evening, she couldn't make it. I ducked out of work early to grab my foils, and raced the Laser instead. Mike had a very bad race, just unlucky I guess. I didn't have a bad race, got lucky, and won. 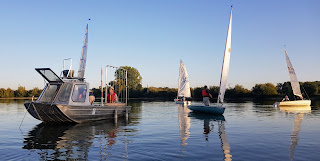 The following and final week, Amanda was away on a course, so I turned up at the Club that evening with my Laser kit to find a flat calm and Mike with a very disappointed look on his face when he found me rigging my Laser. It was at that point I realised that I only had to sail that one last race to qualify. And if Mike was going to keep his top spot and take the Cup, he had to beat me.

It was a good turn out for the last of the summer evening sailing, despite the lack of wind. The Wednesday Class is split into three fleets, Solos, Lasers and Handicap. So despite the plethora of boats littering the lake, all of whom you have to avoid, there were only five of us in our fleet to worry about competing against.

I got a good start, all things considered. Mike broke off to the left hand side of the course, I tacked onto port early and went right, sneaking just ahead of the others.

Light wind sailing in a dinghy is all about keeping the boat moving at any cost. You scrunch yourself as far forward as you can reach to try and lift the transom clear and reduce drag, and heel the boat to leeward to help set the sail; then any drift of wind that you find can move the boat and not first waste energy having to shape the sail. 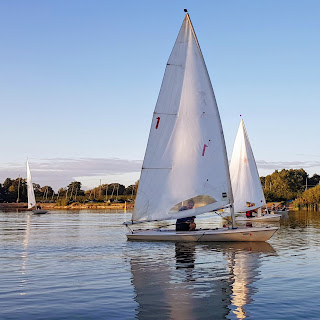 It takes surprisingly little wind to move a dinghy. Not enough to ruffle the water. You also have to hold yourself exceptionally still, braced in an uncomfortable crouch, and every movement or adjustment has to be breathlessly smooth. The slightest ripple of movement out of place risks shaking the wind out of the sail and stalling the boat. Cramp is a constant companion, and you know your body is going to punish you for it the next day. 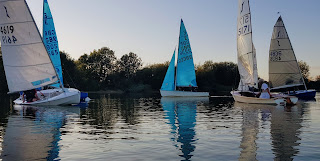 I finally reached the layline for the windward mark, drifting in on starboard. Mike was laying the mark against me on port, just ahead. Perhaps. The wind lifted, bringing me up onto a course to hit Mike's beam even as it headed him. I bore away slightly to pass astern. It seemed unfair to hunt him down and force him to tack. He commented, nervously I thought, that I was being very kind.

I wasn't. I just wanted the extra speed trading that little bit of height would gain me, and to be in a better position when we came around the mark for the next leg. I didn't want to force him out and leave him to sit on my wind.

I tacked and rounded the buoy just astern of him, now sat smugly on his wind. Pete, racing his Comet in the Handicap fleet, was to Mike's leeward, giving him no space to sail clear from me. We were moving, but none of us moving very fast. The rest of the Laser fleet had fallen behind and were still struggling to windward as we crept together down the run.

And then there was a slight thump, a moment of distraction, and Mike laughed in delight. My boom had eased out, I'd dropped too low in my course, and it had just tapped his hull.

Gritting my teeth in frustration at such a stupid mistake, I hardened up to clear space between us and took my penalty turns. Tack, gybe, tack, gybe, try desperately, desperately to make everything smooth and flowing, keep the boat moving at any cost, don't hit anybody else, they're all coming around the windward too now.

And then I settled back onto my run, now upwind of Mike and Pete by three or four boat lengths. And in the time it had taken me to do my turns, they'd mostly sat becalmed and were now covered by the rest of the fleet coming around windward.

I, on the other hand, had gained height through hardening up to take my turns, and now found myself in clean air, separated from the other two and clear of the rest of the fleet, and still blissfully moving.

I slowly edged past them and gradually left Mike and Pete clearly behind. The rest of the race remained tense, my legs cramped, desperately trying to avoid any stupid mistakes, trying not to sail unwittingly into any unseen holes or patches of weed, or otherwise squander my now growing lead.

The beat from the leeward mark out to the wing of the figure of eight course was tricky, the dying whisper of breeze left in the fading evening light shifting continuously.

The Race Officer finished us after just the one lap as the light was going. As I crossed the line, I could see that a good number of the Handicap Fleet hadn't actually made it to windward yet.

Completing the race meant that I'd qualified for the series. Winning meant that I matched Mike overall on points, and having beaten him in the last race we'd sailed against each other, it meant that I'd stolen the series out from under his nose and the Cup was mine.

I almost felt bad for him.


The Laser fleet at Frampton isn't large. Half a dozen boats out for any one race is pretty typical. But we're all quite evenly matched. Mike, Pete, Rhonwen or Jon can easily beat me in the right conditions, and on any given day, in any given conditions, if I sail my best and don't make any stupid mistakes, I've got a good chance of beating them if they don't do the same.

The racing is good. You don't find that very often. 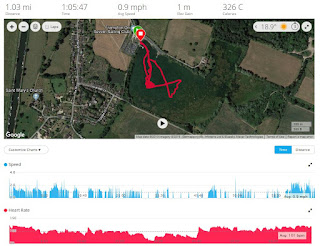 I've been sailing at South Cerney a couple of times over the last month or two. Good open water, no issues with weed or depth, and a lovely Club with lovely people, a few of whom are good friends I've know and sailed with for a long time. I'm definitely going to join there for this next year.

But I can't leave Frampton behind. The water is terrible. Small, shallow, weed infested, and across the summer it was, of course, positively toxic. Cercarial Dermititis. I never want to go through that again.

But the company is so good, and the racing is such good fun.

So for the next twelve months I guess I'm going to have to juggle the membership and commitments of two clubs.

We'll see how that works out.