Crawling out of bed and getting to the Club on Sunday was a bit of an ordeal after the couple of late nights and lively gigs of the two previous evenings, but I made it. And beat Amanda to there by about fifteen minutes, so had the pleasure of dragging the Enterprise from her berth over to the shoreline all by myself, which built up enough of a sweat to properly wake me up.

The sun had been forecast to shine, but was proving to be elusive first thing. The southerly wind was blustery, as the forecast had promised.

Another simple figure of eight course, but with only the one upwind beat this week, and no dead run for us to goose-wing down. The turnout was impressive, given that this is only an unofficial, out of season, informal series, not an official part of the Club's racing programme; I didn't exactly count, but there must've been just over a dozen boats on the start line.

Despite my early arrival, we were late getting onto the water, but it turned to our advantage. The wind made the launching area an awkward lee shore which slowed us getting away, but once we were afloat we had time for no more than a quick run up and down the line to get our bearings before the gun went and we were racing. 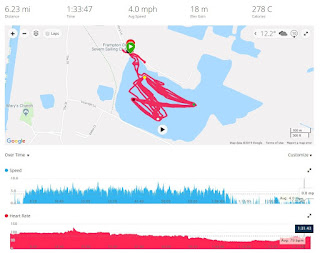 It was, to be fair, a day for the Lasers and Solos. We invariably gained ground up the beat, but off the wind lost it again and then some, as the lighter single-handers were quick to plane in gusts that were often not quite meaty enough to lift our heavier boat up with them.

It didn't seem to matter though. It was great to be out on the water, the sailing a real pleasure, and we sailed well enough to finish somewhere in the front half of the fleet so we acquitted ourselves well enough.

Next weekend I'm off to Plymouth with Dad. Calstar should be fit to sail at last. Windguru's forecast for Saturday is from the south-east, gusting up to 26 knots first thing then backing and easing as the weekend wears on until it's in the east or Sunday, and less than 10 knots. The waves anticipated are 2m+ however, which makes me feel a little cautious.

Have toyed with the idea of sailing over to Fowey and back, but might simply opt for a day-sail, pushing out beyond the breakwater in the direction of Eddystone before heading back to spend Saturday night in Plymouth. I guess Noss Mayo is also a possibility, although Dad seems less keen on that idea, as there's no shore power and getting to the pub involves a trip to shore with the tender.

The more I think of it, the more attractive the idea becomes however. Especially as the temperature is supposed to be around 11°c for the weekend, so it shouldn't be too cold aboard even if we haven't got power for the electric heater.

It feels frustrating that Calstar has been harbour bound for so long this year, but to be fair, checking back on my journal to last year, it seems we didn't actually get out until the beginning of April, so if we do manage to get out this weekend, this year will be much improved on last.