It was a good weekend, all went more or less to plan after all. Yes, the plan was left loose for just that reason. 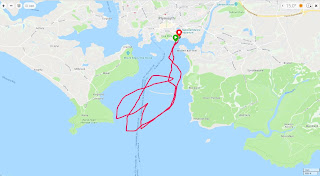 Got down to Plymouth too late in the evening on Friday to eat out, so called in at Sainsbury’s on the way down to pick up some olives, humus, salami and biscuits and Dad and I enjoyed them over a bottle of white wine aboard the boat. Also treated myself to a bottle of Laphroaig; it was discounted to £25 and whilst the truth is I don’t really trust myself with scotch at home, on the boat the damage I can do to myself (and my wallet) is limited by the duration of my stay.

And I was very restrained. Most of the bottle remains, and is still on the boat to welcome me on my next trip down, which will now be later in March.

After a lazy start and a good breakfast at Sound Bites Café Saturday morning, I really do recommend their omelette, we cast off to head out into the bay. It was a lovely winter’s morning, watery sun reaching through a hazed sky just enough to gently warm your shoulders, a light south-easterly breeze playing over the ruffled blue green waters of the Sound. We motored slowly out to pass the Mountbatten Breakwater to port, before putting her head to wind and hauling up the sails. It felt like an age since we’d last done this. It felt so good to be back.

We beat out towards the Eastern Entrance, the wind freshening, the little yacht heeling happily to 20°, trotting along under full sail. Leaving the Breakwater to starboard, we found ourselves sailing into a swell rolling in from the south-west; big waves occasionally blocking view of the horizon as Calstar climbed up then tipped over to slide down the backs of them. Most were generally around 2 meters or so but the odd group were somewhat bigger, but none of them breaking. 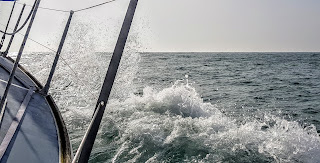 We bore away onto a beam reach, heading west towards Rame Head, just enjoying the day and the liberation of being afloat and sailing again.

We picked our route more or less at random, choosing our direction as much for a different point of sail as any other reason, sailing back in through the Western Entrance and along the inside of the breakwater, watching  a mixed fleet of dinghies racing in the sailing grounds between Drake’s Island and Jennycliff Bay. Then closing in on Bovisand, we tacked around, heading back in the direction of Cawsand Bay before hardening up to lay Penlee Point accompanied by the melody of breaking waves on the rocky shore of the headland, then beating away, back along our original path to re-enter the Sound from the east.

Light mist began to rise from the water as the afternoon wore towards evening. A solitary fishing boat was laying a maze of lobster pots just outside the Breakwater. A few of other yachts were out and enjoying the weather with us, but most staying inside the shelter of the sound, only a couple like us venturing out beyond it. The wind eased as the day wore on, and the swell with it. We headed back to Queen Anne’s Battery, lowering our sails and motoring back into our berth without mishap, after some four hours or so hours and just under 16 miles of sailing to take us nowhere in particular and bring us right back to where we started.

We walked into town Saturday evening and ate at The Village. Sunday was breakfast of another omelette at Sound Bites, then a morning doing odd jobs on the boat. The day began bright and still, so I was originally happy not to sail, conscious in part of the long drive home. The jobs needed doing; new dodgers lacing up to the cockpit guardrails and various fittings that needed to be screwed and bolted back on below now the cabin upholstery work has been finished. Then the breeze filled in around lunch time, I suspect just to mock me. It would’ve been a lovely day out on the water after all, and I’d missed the opportunity.

There’s possibly a lesson in that.

Anyway, whilst I laboured with lacing up the dodgers to the guardrail in the unseasonably warm sunlight, and Dad busied himself below decks, the harbour mullet made for very good company.

The drive home was uneventful. I got back before Nikki finished work at 1800 so cooked a curry for supper for her and Sam. A good end to a great weekend.
Posted by tatali0n