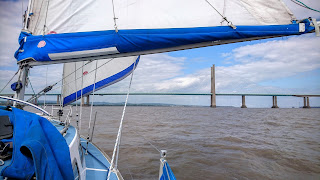 A friend from the sailing club lives pretty local to Portishead. He races a Laser on the lake at Frampton, so usually races in a different class to me, starting four minutes behind us but otherwise sailing the same course. He's pretty handy with that Laser of his; I typically count myself as having sailed a good race if I manage not to let him lap us before we're done. Which happens less often these days, but is still a measure to go by. I think Steve's got a fair bit of "big boat" experience, but gets most of his sailing kicks these days from kite surfing. That's something I've always wanted to have a go at.

Anyway, when he first heard we'd bought a yacht, he emailed me to say he'd found us a "boat warming" present. He duly presented us with a large white fender he'd found whilst beach-combing somewhere over on the Welsh coast. He'd even scrubbed it clean for us.

He and his girlfriend joined us for our trip out this Sunday. Whilst Steve has more yacht experience than Dad and I put together, Angela was new to the whole thing. But she was charming, enthusiastic and quite biddable; in other words, the perfect crew. 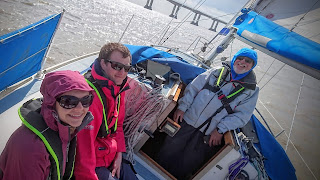 We locked out at 1330 in a very crowded lock with nine boats, ourselves included. High water was due for 1515, the tide very neap, so we planned a run up under the Bridge and back. This being Angela's introduction to both the Bristol Channel and yachting, we figured the Bridge is just one of those things you've got to do. We all get to drive over it an awful lot, but very few of us get to sail under it. It's quite a different perspective. 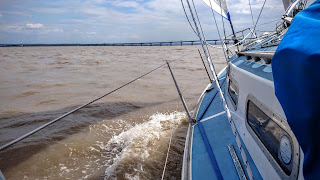 Stowing the fenders and lines was refreshingly quick and easy with two able set of hands to do the job, so it was done before we'd left the Hole and cleared the breakwater. We motored across the King Road to get to the other side of the channel and clear of a commercial vessel coming up to Portbury. We could see her three attendant tugs about half a mile away positioning themselves about her for the swing and close-handling into the narrow lock at the mouth of Portbury Docks. Passing the Denny cardinal marker, now clear of the channel, we put our nose head to wind, hauled up the sails and stilled the engine. Turning down wind, we then ran deep on the wind for the Bridge. 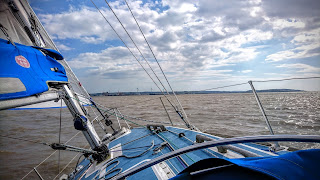 The morning had started off still, but the wind had built to about 10-15 knots for the afternoon. The little boat nipped along at a respectable pace, things relatively tranquil in the cockpit, the sea relatively flat, without the downwind roll of previous weeks that had made our newbies aboard quite billious. However, the genoa kept collapsing in the shadow of the main, so we gybed, hardened up a little and held it until we could gybe back onto a port rumb line that would take us through the centre of the bridge on a broad reach. As we neared the edifice, camera phones all predictably came out. We joked that if we somehow messed up and crashed against the footings of the bridge, at least the accident would be clearly documented for the subsequent inquest into our sinking.

Through the bridge and abeam of Chepstow District Yacht Club on the Welsh bank, little wavelets began leaping up vertically all about, quite a peculiar, improbable sight. There is a technical word to describe this kind of wave motion that I've read somewhere, but didn't note down and haven't been able to find it since, which is most frustrating. The surface agitation was being caused by the surge of the tide hitting the sands below. I haven't often seen it down this far, but you see it with almost every tide over Ridge Sands above Sharpness, further up channel. 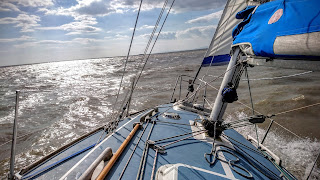 The tide was beginning to slow and it was promising to be a hard beat back, so about a mile short of Chapel Rock we gybed, hardened up against the wind and began to beat back down channel against the last of the flood tide. Still under full sail, the little yacht was well pressed over to about 20 degrees, leaning still more in the gusts. She held it well however, the boat speed through the water just a shade over 3 knots, the sea state still smooth for as long as the tide still ran with the wind. 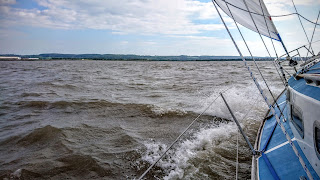 With the last of the tide against us our tacking angle was improbably wide, and it being a neap I didn't want to stray too far over the shallows. This made our effective channel quite narrow. However, tacking the boat with three able sets of hands was an absolute breeze, so we simply enjoyed the sailing in the building breeze, beating back and forth until we gradually began to win against the tide, and finally laid the Bridge on a starboard tack. It took us quite near to the huge concrete footing, all of us uncertain whether or not we'd clear it, but willing the little boat to climb through the wind just to prove that we could. It was close, but the tide was now running with us, so it was never uncomfortably so.

Out into the open water below the Bridge, the wind continued to build and the tide began to strengthen against it. Consistently heeled to 25 degrees or so, we put a few rolls into the genoa. More for the comfort of the crew and Dad's peace of mind than the actual need of the boat. It was the first time Steve, now at the helm, had sailed a bilge keeler, and he commented that she was surprisingly weatherly. I'd like to think so, but it could be he was just being polite. Close hauled, the wind was hard in our faces, but not especially cold, certainly not when the sun joined us through the cloud-broken sky, which was more often than not. Tacking back out from the Avonmouth shore the sea set against the tide was now beginning to build and the "Westerly slap" of waves hitting the hull between the bilge keels a frequent, percussive accompaniment to the surging of the wind. 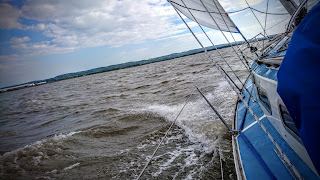 We put the first reef in the main. Spray over the bow was liberally dousing the coach-roof now, and occasionally the occupants of the cockpit. But the old Griffon is an especially dry, comfortable boat. The odd bit of wet was more flavour than discomfort.

At about 1700, on the finally approach to Portishead Pool, we started up the engine and doused the sails.

Locking back in was a crowded affair. The Hole was full of boats waiting on the gate, so we held off outside in the Pool until they made their way in. I wasn't certain we'd fit, reluctantly accepting we might have another half hour wait for the next lock, but the marina office squeezed us in at the back, rafted up between a powerboat and another yacht of about the same size as us.

A shade over 4 hours underway, most of that under sail, and just a whisper over 17 nautical miles covered. Our average speed over the ground was a relatively humble 4.2 knots, so you could tell it was neaps. I did see the plotter register a shade over 8 knots at one point in the The Shoots the approach to the Bridge. Quite tame for these parts. Lovely sailing though, and it was nice pushing Calstar a little more than usual on the beat back. A liberty I'd probably not have been allowed to take had it not been for our guests aboard. Dad's usual rule is that I reef once the iPad is at clear risk of sliding off the chart table. Not unreasonably, he doesn't really do life at 20 degrees.

It's not like we need the iPad as I've got the Sony up on deck with me plotting our track and telling me where to go. But Dad likes his iPad, prefers the Navionics app and the admittedly clearer screen of the more modern device, and it's his boat, so his rules. And I really don't mind.

But it was fun having Steve and Angela aboard so that I could thrash the old boat about for a bit.
Posted by tatali0n