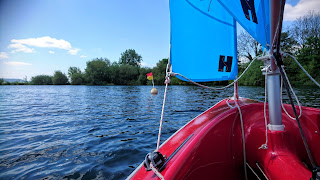 Another typical weekend of sailing, gigging and sailing again. It's a hard life.

Saturday morning was spent on the lake helping out with Sailability. I say helping out, but actually I left the oldies to do all the heavy lifting and spent the morning playing in an Access 303 dingy with one of the newer Sailability members, a lovely guy called Peter, and then later on with my good friend Andrew, who I think has been a member of the club almost as long as I have. 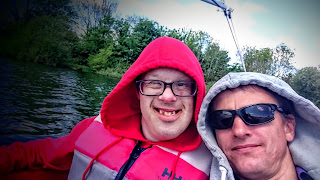 The wind was light and fluky, with the occasional energetic gust just to keep us on our toes. The Access 303 is a small double-hander with a ballasted daggerboard with enough weight to make the boat self-righting, though I've never been allowed to test it. You sit side by side in a hammock seat with your fellow crew member, and steer with a vertical tiller, a bit like the stick of a small aircraft, but without the pitch control. There's no hiking involved; when the wind hits the boat is designed to heel against the daggerboard until the increasing stability puts enough opposite pressure on the boat to stop her from heeling further. 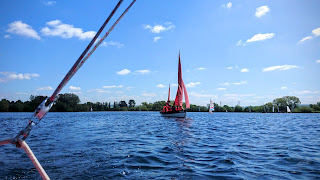 Got home that afternoon about the same time Nikki finished work, so we took Sam and the three dogs across town to Plock Court to give them all a good run before I set off for the gig that night, which was in Kingswood, just outside of Bristol. It was a great gig. Our usual drummer, Bean, was away with another band, but our friend Jake stood in for him so he wasn't missed.
Posted by tatali0n