After the rains have gone 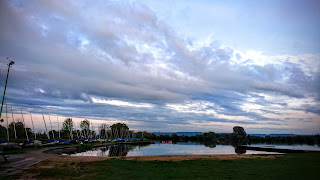 I raced Buffy around the cans at Frampton with Hels Wednesday evening. The heavens had been pouring pretty much all day, but the rains eased and then ceased as I pulled into the Club around 1800.

We rigged, rushing as usual, and launched, making the startline on the far side of the lake just as the four minute preparatory gun went. The wind was a light, variable drift from the east. A class race, we were against seven other boats in the handicap fleet, including another Enterprise, but no Ghost. The ones to watch were a Mirror, an Optimist and, something that has been a pleasant surprise to see develop, a certain young lady in her Topper who has become rather quick on the water of late.

We nearly lost it right on the start. We arrived to the line early, loathed to fall too far behind in the flaky, unreliable wind, and tucked in under the Oppy, meaning to hold position for the last thirty seconds. And didn't notice Tony in his Mirror beneath our own sails, pushing us up and forcing us over the line early.

With ten seconds to go, and our bows clearly over, we bailed, but picking up a fortuitous, momentary increase in pressure pushed out, accelerating early over the line, tucking around Tony's bows then ducking back in and behind just as the gun went.

Already moving at speed, in suddenly clean air it was a simple thing to harden up and go. Pure fluke, but we took our chance, were first to the windward mark, and thereon in gradually left the others for dust over the course of the following hour.

It was the perfect Wednesday evening sailing. Light, shifty conditions, often little more than a drift but rarely failing completely, it made for a cerebral race, intense but almost meditative; a picturesque setting in the soft light that's peculiar to a broken, clearing sky after a grey, rainy day. We sailed to a backdrop of the rustling sails, the creak, slap and gurgle of many hulls on the water, and early evening birdsong.

We won, which might possibly be our first win of the season. The young Finn in his Oppy wasn't far behind on corrected time, and Hannah, keeping up her recent trend, took third in her Topper. Not easy in such tricky, light conditions.

Tony, who so very nearly spoiled our day on the start, didn't do so well. But then there is a certain lottery to any drift.