A small world of infectious enthusiasm 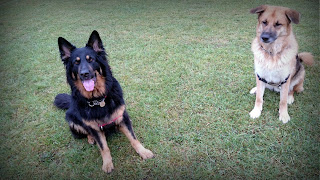 A week today, with luck and a following wind (or even a headwind, as long as there's enough but not too much of it) we'll be somewhere off the south coast of Cornwall. Dad, Ben and I are booked to do the practical needed to finish our RYA Day Skipper with Cornish Cruising next week. Five days aboard, departing Falmouth on the afternoon of Sunday 2nd. It almost seems redundant now to chase a course and a qualification, as we have our own boat and our own miles in our logbook, and for the cost of putting the three of us on the course we could've replaced the standing rigging or almost commissioned a much needed new set of sails.

But it's Cornwall, and it's five days afloat, and it's sailing and I can't wait anyway. It'll actually be really nice to have five days where I can focus on the sailing and boat handling but not be absolutely, finally, ultimately responsible for the welfare of the boat and all aboard. Not that I mind that in the least, but it brings a certain pressure when it's your responsibility and your boat and your crew and your money and your fault if you sink and everybody has to swim home. Next week, it's somebody else's boat, somebody else's agenda and their final say on whether or not anything is a good plan or a dangerous folly.

I find I always gain a lot sailing with other people and other boats, especially when the other people know their boat and know what they're doing. And though I've now got 499 miles of my own already in my logbook (aboard Calstar, since the "first date" written of earlier on this site; I counted them up yesterday morning, a weekend without salt water and I'm already twitchy) I know I've still got an awful lot more to gain. I really can't wait. And I love and adore Cornwall.

So I had thought last Saturday's trip to Cardiff was to be our last outing with Calstar before we head off to blue waters. However, Dad's arranged for her standing rigging to be replaced during the week we're away (it's at least 15 years old, so long, long overdue), so we have to deliver her up the River Avon to Underfall Yard in Bristol Harbour this coming Thursday afternoon. We need to be there an hour before they drop the stop gates on the harbour at 1809hrs, and can't lock out of Portishead until the first lock at 1530, which gives us about 90 minutes to get out of Portishead, into to the mouth of the Avon and then up to the gates of Bristol Harbour, about 7.5 nautical miles in all.

There will be a healthy amount of tide running under us, so it should be more than possible. If the weather is kind, it'll be a very pretty trip.

"Ondine" has been sold. To our club at Frampton as we'd hoped, who will keep her for Sailability, which is nice as I'll still get to sail her on occasion. As I did last Saturday. A very pleasant morning on the water, a bit blustery to begin with, but dropping off as the day wore on, until the wind had all but given in by the time we came ashore to pack up a little after lunch. I always enjoy the company of Frampton's Sailability members, their enthusiasm for being out on the water is infectious, and they particularly love sailing Ondine. 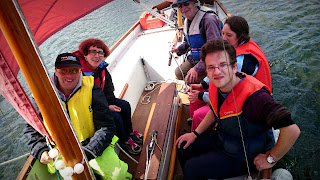 Had a great couple of gigs. Saturday night was a wedding party. A small but riotously enthusiastic crowd, very appreciative, and a very pretty venue. Although I've only ever had one of my own, and frankly wouldn't want to repeat the experience, I always love playing weddings. People always seem so full of promise and life and hope.

I should perhaps qualify the comment preceding that last observation. Mine was a great wedding, and a great reception after. But I'm really not a party person, unless I have a guitar between me and the crowd to give me an excuse for being there. And Nik, patient, enduring and understanding in so many things, was quite explicit: I wasn't allowed to play at my own wedding. But no, I'm not a party person at all. And that is an understatement, so being expected by your admittedly gorgeous new wife to "mingle" and "socialise" with friends and family whilst staying sober and coherent enough to be able to credibly do both is close to my own idea of a personal hell. Second only to having to push a shopping trolley around a supermarket.

Something else she's inflicted on me any number of times over the years and continues to do so on occasion. Did I say she was patient and long suffering? She's not without the cunning to exact due payment for my many liberties and neglects. 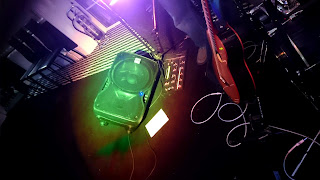 But I like other people's weddings. And proved lucky in picking a girl daft enough to have put up with me these many years despite the obvious liabilities that come with the package, so I've had no need to repeat the whole wedding thing myself.

Funniest thing, as I left the stage on Saturday night, having finished the last encore, a woman came up to me and asked, "Did you just say the band's name was Freefall?"

"Oh my God, you've been booked to play my birthday party in December! That's so great! Most of the people here tonight will be there as well!"

Funny enough; for both Saturday night's wedding and the above lady's birthday party due later this year in December, the band was, unusually, booked unheard on strength of recommendation alone through separate third parties, long time friends of the band that had previously worked with us for many years. One a promoter and the other the owner of a PA & lighting hire company that has managed the sound and lights on many, many gigs we've played, but otherwise quite unconnected to each other.

It's a small world indeed. 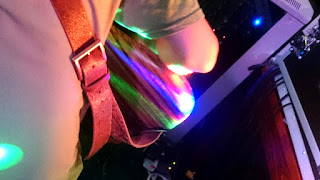 Sunday was a different kind of venue; an afternoon gig at the Royal British Legion in Kingswood on the north side of Bristol. A screw-up with the times had us there a couple hours earlier than we needed to be, so there was a fair bit of sitting around once we were set up, and being a Sunday afternoon and a family venue, we kept the volume very subdued, which always makes for a peculiar feel on stage. But again, the crowd were lovely, quick to cheer and dead set on enjoying themselves and the show. And the kids: I love how little ones respond to music. There was one little tot in particular, couldn't have been more than a couple of years, that kept wandering away from her family's table to dance to the band.

To be fair, I suspect the little lass would get up and dance to the sound of a washing machine, so I don't delude myself that it was the dancing and not the band she really loved. But again, such enthusiasm for life is an infectious thing.
Posted by tatali0n