Last Sunday was very much a four dog day, two of the dogs unanticipated.

A couple of dogs fostered local to us had to be moved, fairly urgently and for a number of reasons. The new foster homes were in Newquay and St Austell down in Cornwall, respectively. In the absence of anybody else able to make the trip, I was volunteered to provide the transport. I figured for a six or seven hour round trip, leave at 9am, home for a little after 3pm.

In any case, I wasn't sailing because the lake is still barricaded with a rampart of sandbags to keep the waters in.

The pick-up from Gloucester went smoothly. Candy is a white, female GSD of about a year old; a lovely, playful temperament. Yogi is a male, black and tan GSD cross of about the same age, and came to us for homing from another rescue, Blue Cross, who put an awful lot of good work into his training and rehabilitation.

About halfway to Newquay, we got a phone call to say that one of the pups taken into rescue the day before and delivered to a foster home in Newquay called Zucky was having trouble settling in; growling at the children, and fighting with the resident dog. It was pretty clear the pup was going to have to be moved to another home. A new foster home was found at pretty short notice, we were heading towards Newquay anyway, so were volunteered to pick up the pup and come home via the new foster home in Somerset.

Candy was delivered to her new home in Newquay, we had a cup of tea and took an hour or so to settle her in with her new foster mum Linda W. and her family. Then we nipped over the road to pick up Zucky.

Through no fault of the foster home, the pup was just scared, confused and really unsettled. Another hour or so to calm him down and get him used to us, and he was into the crate in the back of our car where he settled quietly and gave no trouble for the rest of the trip.

Yogi's new home in St Austell was just up the road from Charlestown, as I've previously mentioned. Another cup of tea, an hour or so to settle him in with his new family, and we were on the road again. Yogi headed off for a walk with his foster mum Linda R. and her family; dad, their son and daughter and the couple of resident dogs, Oliver and Ermie.

Finally, our travels took us to Somerset. Dark by now, we arrived to find foster mum Kathy introducing Elsie, a lovely two-year old GSD, to her potential new family, which included a lovely collie called Cody.

We settled Zucky in, and spent a fair bit of time drinking coffee and helping out with managing the introduction of the two dogs to each other. The family were completely taken with Elsie, understandably, but everything hinged upon getting the two dogs to accept each other.

It all looked a little shaky at first, but eventually everybody was settled and content enough to go ahead with the adoption, and Elsie set off to her new home. Ironically back in the direction we'd just come from, in Penzance, Cornwall.

We finally got home just before 11pm, quite road weary.

However, the motive behind the whole story above is just to share how the rest of my week went.

From the stress of finding new foster homes at short notice and with some urgency, delivering the dogs, re-locating a stressed out pup and helping manage the introduction of Elsie and Cody, the week has brought rich rewards in what followed.

None of these photos are mind. I've nicked them from the respective families, who posted them on Facebook; I'm quite sure they won't mind however. 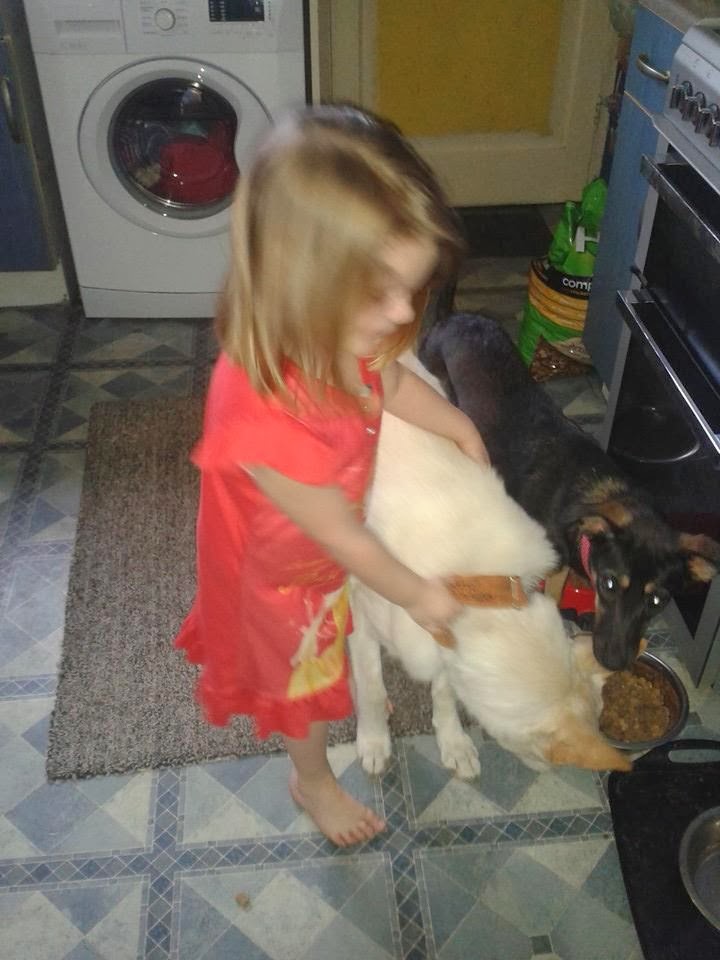 Candy has settled in famously with Linda W. and her household. She's getting along wonderfully with the terrier and collie that are her new house-mates, and is a real hit with Linda's two grandchildren and their dog, Jaz. 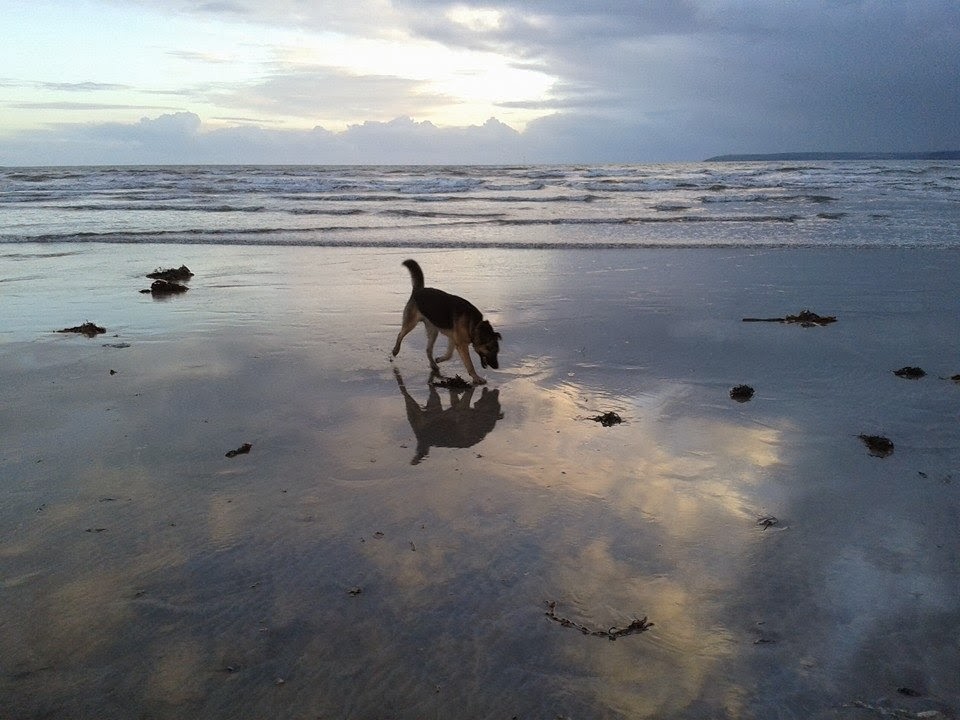 Yogi is doing us proud. A flawless house guest and pack mate to Oliver and Ermie, he's revelling in the freedom of their house, and enjoying long walks on Cornish sands. I'm actually jealous of him. He has folks due to come see him soon with a view to possibly adopting him, so we're keeping our fingers crossed. He is a lovely, lovely young lad. 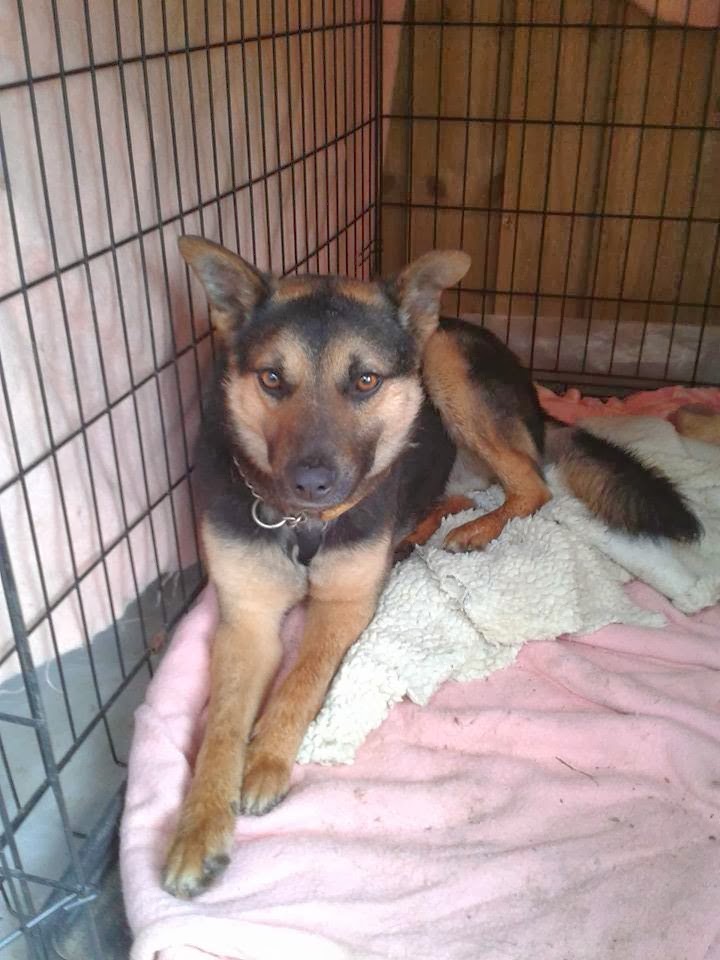 Zucky is now settling in well with Kathy and her family. I think a great deal of credit is due to Kathy and the care she's given him in bringing him around. Their own GSD Arthur is a lovely beast and good company for the emotionally fragile little pup. Got high hopes for this little lad, and am expecting to see him again this coming Saturday, as Kathy has volunteered to take on another foster we've got coming in at the weekend.

I've got to confess, we were apprehensive about this one. Although they had little moments of peace and tranquillity, there was a degree of shouting and lunging between her and Cody as we tried to get them to accept each other.

There was a lot of soul searching before her new family decided to take her on; we thought it should work out, but couldn't be sure, and in the end, took a calculated risk, fully discussed with her new family.

It transpires that by the time they'd driven home to Penzance, Elsie and Cody had pretty much accepted the other and grown fairly relaxed in each other's company. By the following morning it seems they'd become firm, sound friends.

I think these two were just meant to be.