Actually, the very word "blogging" makes me feel a bit squirrely. It's a singularly unattractive sound; given that it's a somewhat modern creation you'd think the collective imagination of the Infernalnet could have come up with something soundling a little less lumpen.

Amazingly, it's been about a year since I last typed at this thing. In two days time it will have been a year since I fractured my foot, which is something of a happier milestone. 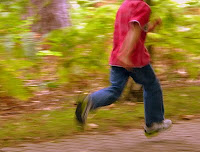 That ended well enough. Six weeks to the day of the break the doctors cut the cast off, pushed at prodded at the refusing bones and said I'd be fine, don't bother them again.

"So that means I can return to normal activities again then?"

I explain, at which point the caveat is added "I'd give that a few more weeks if I were you" and I'm turfed out to fend for myself. They let me keep the crutches. Whilst definately remaining uncomfortable for a while, the liberation of being free from plaster was exhilarating.

Twelve months later, despite the odd twinge where I broke it and the precaution of now wearing a neoprene sock when I'm in the dojo, I'm pretty much back to normal and I haven't broken anything since!
Posted by tatali0n