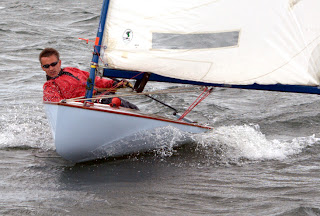 The wind is howling outside the window and forecast to continue through for tomorrow. With the lake at Frampton looking like somebody's pulled the plug I'd pretty much decided to leave my Europe "Blue Moon" ashore until the water levels went up a bit.

Spent the bank holiday weekend crunching centreboards on the bottom in all sorts of unexpected places, and the daggerboard on the Europe is long, pretty, delicate and expensive and doesn't take kindly to being crunched into the floor. But with the temptation of a good blow, I think it's going to be hard to resist.

Feels like ages since I last had a good race, so suspect I'm going to cave in and risk it if the winds hold up till tomorrow night. This could end in tears. But it could also be a hell of a lot of fun :) 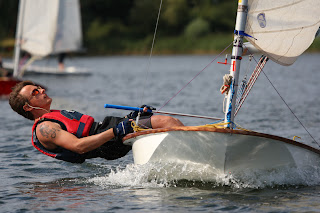 Current forecast is for winds of 20mph+ on Saturday, which may be grist for the mill for Blue Moon, however scary with the current lack of depth in the lake, but are silly conditions for a British Moth. Poor Atlantic has been languishing under cover now for most of this year, spurned for the favours of the Europe. Saturday is the Frampton Moth Open though, and she's sat there begging to be sailed.

It's quite clear we need to have one last blast before I move her on, just for old time's sake. Will just have to try very hard not to break anything!
Posted by tatali0n