And so in summary, two weeks of harbour hopping across Greece reduced down to a few simple metrics. Even with the photos now posted, without accompanying dialogue I guess it loses some of the poetry of the trip. But I think over a month on now, I have to accept I've missed the opportunity to properly write it up.

I've noticed that's a frequent theme on this site, following any protracted length of time away. I should learn to journal these things as I go; I often spend too much time running around on my return having to make up for the time I've spent away to actually have the time to properly describe where I've been and what I've been up to. And that's an opportunity lost.

So Dad and I flew to Greece where we met our friend Mark, who had been kicking around enjoying his retirement aboard "Geneva", a Jeanneau Sun Odyssey 389 he'd had on charter for most of the summer. We pottered around in the Ionian for a few days until another friend Vernon joined us, then met up with a fleet of five other yachts led by Rich, the guy who had organised the Athens trip. 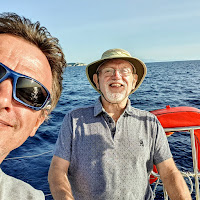 We then spent the next ten days sailing east roughly in the direction of Athens, stopping at various harbours each night, sometimes together, sometimes on our own, transited the Corinth Canal in convoy and finally delivered the boats to Athens.

The weather was amazing. We swum most days, and drank every night. Made good friends, sailed beneath the mountains and sky with them, and did our level best to drink each other under the table when the sailing was done.

Actually, on that last point I do exaggerate. But only a little.
And so, reduced to the final bones, in summary:
14 nights aboard
11 harbours visited
5 bays swum (10/12 updated - I'd overlooked Parga)
1 bridge passed
2 canals transited
426.94 nm sailed
82 hours 48 minutes underway
1662 photographs taken
Posted by tatali0n