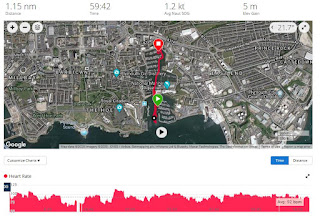 And by that I mean we'd originally planned to cast off 1st April to move Calstar from her old berth in QAB to her new home in Sutton Harbour, but were delayed until 1st June.

But it's finally done. Ignore the time on the screenshot at the top. It took about half of that, including the few minutes sat outside waiting for the lock, but I forgot to stop the log once we'd landed in Sutton. What can I say? I'm a little bit out of practice.

But we are getting back into it. The same log (which again, being out of practice I typically don't remember to start until I've been out on the water for some time) paints a pretty picture of the last few weeks . . .

I found it most amusing to note that my average heart rate when moving Calstar was 92bpm, including the time wandering about the pontoon setting lines and generally securing the boat in her new berth once we'd arrived and I'd forgotten to stop the clock. I hadn't realised Dad's helmsmanship made me that nervous!

By contrast, crewing for a friend on another boat in conditions a lot colder and rougher than we had in Plymouth on Monday my heart rate averaged 82bpm. Still much higher than my average resting of 59bpm, but hardly stressed at all. I guess I'm generally sanguine in attitude when things aren't my direct responsibility.

I don't know how accurate these things are. That said, a max of 175bpm reminds me of what a fantastic time I had with the Laser at South Cerney last Sunday. A bit of a flukey, shifty wind, but when the gusts came through the little boat screamed along. Fastest reach was 10.1 knots. Back over there again tomorrow for another play, and a bit more wind forecast for this week.

I can't wait.
Posted by tatali0n