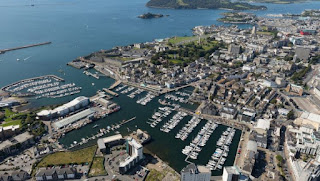 Had an excited phone call from Dad a couple of hours ago. Seems the powers that be have announced that from Saturday 4th July the pubs can reopen and, more to the point, people can go camping again. Amongst other stuff. As long as they observe what the incumbents of No. 10 have cunningly branded "1m-plus" social distancing.

Which I assume is a sop to appease those zealots in their party who desperately want to abolish both the existing 2m rule and social distancing altogether in the interests of the economy and let the proles just take their chances out there, and the care-bears on the other side of the fence who still believe it's far, far too early and that everybody bar none should still be in the strictest of lockdowns and not allowed outside without a signed, dated and stamped government issued ticket.

Sorry, as I've previously pretended, I try not to get to political here. For myself, I'm very divided. I badly miss gigs, both the buzz, the companionship and the little bit of pocket money they generate for me, and I badly miss karate, and I badly miss harbour-hopping along the South Coast with Dad and Calstar. And I badly I miss racing. And I badly miss the fact that my daughter and her fella do not currently have a job but instead has a whole heap of worries as to whether or not their pub will ever be viable again. They are planning to reopen on the 4th.

I also miss beer out of the tap instead of the can or bottle.

From 4th July we can stay over on the boat again. So Dad is very, very excited. He spent an hour explaining to me that he'd bought a mini George Thornbury grill so that he could cook on the boat in case we couldn't find any restaurants to feed ourselves down there. I tried explaining to him that we already had a gas stove and that his mini-grill would need shore power to work, but his reply to that was that so did his iPad.

It doesn't, and can of course charge off a battery. But if you use it as much as Dad does his, then you need a lot of batteries. I am struck by how different our aims and objectives are when it comes to sailing. But I don't mind. It'll just be great to be back afloat with him again. I can't wait.

I stole the photo at the top from our new marina's website. It's an aerial photograph of Sutton Harbour, Calstar's new base; she's berthed in the bottom right corner. You can of course also see her old home at Queen Anne's Battery on frame left, just outside of the harbour lock gates.
Posted by tatali0n