And a Happy New Year. Belatedly so, for which I apologise, albeit I seem to do this every year.

Christmas was good. I have, just about, sobered up now, or as much as I'm likely to. We had everybody over to ours Christmas Day. Nikki cooked far, far too much food. As she always does. And it was delicious and everybody loved it. As it always is and they always do.

My daughter Tash and her other half Dan couldn't stay for dinner as they were eating with Dan's family, but we saw them in the morning. Tash got me a t-shirt . . . 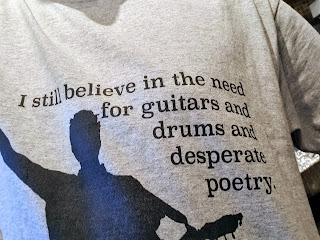 It's a line from a Frank Turner song. She and Dan also got me a book the man wrote, about gigging, I think. I had to confess I hadn't yet read the one they bought me the Christmas before, which was about his song-writing.

The problem is an age thing.

My eyes have deteriorated to the point that I can't read the text of the average "real-life" book without my reading glasses. And I'm so resistant to the idea of needing glasses, or unpractised with the concept, that I never have them to hand when I need them. After all, I've only had them for a couple of years.

If you see a guy in a restaurant with his mobile phone taking pictures of the menu just so he can zoom in on them and decide what he wants to order, that's probably me.

The admission was taken in good humour. I gave the original Frank Turner book from the previous Christmas "Try This at Home" back to Dan so he could take it and read it. I promised I'd read the new one.

As it happens, after they left, I had the genius idea of buying the Kindle version of Try This at Home and reading it on my phone. In parallel with Vasily Grossman's Stalingrad on my Kindle, which I'd started reading before Christmas.

I just finished reading Try This at Home today in fact. I'm still working my way through Grossman's Stalingrad.

Lilly got a bath. As in a professional groomers type bath, as there was no way we were going to be able to get her into our own bath. If she sees a lake, a river, the sea or even a muddy puddle, she'll leap straight in.

Show her the bath, and she bolts.

As we were having our bathroom refitted in December, she spent a few weeks coming into the office with me. Out from the context of home and field, into the sanctum of my office, it became very obvious, very quickly, just what a scruffy, smelly old woof she'd become.

So we booked her into the local grooming parlour over Christmas, and for a week or two after, she became once more lovely and fluffy and sweet smelling. Insofar as a lump of a German Shepherd can ever smell sweet.

My eldest son Ben (on the right hand side, sat next to his younger brother) came home from school for Christmas. Which was lovely. We didn't get to sail together this year; he doesn't have any winter kit that will fit him anymore, but he did persuade us to sit down and play a family game of Risk.

I don't know why we do it. He normally wins. Not through any great tactical or strategic genius, he just manipulates Nikki, Tash and Sam into ganging up on me, then takes them apart once I'm off the board.

This time I successfully persuaded Sam and Nik to gang up with me on him first, and then once he was gone, capitulated to Sam. We all thought it was highly amusing and medicine long overdue.

Ben demonstrated that despite being a fully realised grown-up now, with proper qualifications, a proper job teaching secondary school kids, a proper flat of his own and a proper steady (and quite lovely) girlfriend, he still has the absolute capacity to throw a toddler-style tantrum and sulk like a surly teenager.

It was a great Christmas, loved every second of it.