Calstar: comfort of a lock gate

Dad and I went down to check on Calstar this weekend. As the weather was too rough to sail, we didn't bother going down straight after the gig Friday night, but hit the road first thing Saturday morning. Or would've done, except Dad overslept. So it was more of a second thing.

Apparently, since he retired back in April, he's not been setting an alarm in the morning any more and instead just letting the daylight wake him up.

The boat was fine, all the lines still attached, although from the bits and pieces we picked up off the cabin floor it was clear things had been a little bit bumpy over the last few weeks. We'll be moving her into Sutton Harbour as of next April; literally next door, but sheltered behind a lock gate, which will put Dad's mind much more at ease.

It's nowhere near the same inconvenience as the locks at Portishead or Cardiff. Sutton Harbour's lock is left on free-flow for around three hours either side of high tide, and when it's not, it operates on demand 24/7, 364 days a year. Apparently, they take Christmas Day off. 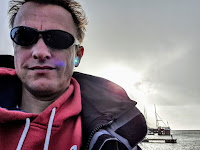 Thinking about the year to come, I'd like to explore a little more with Calstar; we've spent the last couple of years essentially pottering between familiar ports, being completely unadventurous, but there are lots of other options, smaller harbours and beaches to anchor off.

The Scilly Isles seem a little out of reach, given the limited amount of time I can get off work at the moment. And I'm not sure Dad or Nik would necessarily appreciate the amount of time or sailing involved to reach them. But I do wonder if the Channel Islands might not be a little more achievable this year.

Guernsey is about 80 miles from Plymouth. About 20 hours of sailing in Westerly Griffon terms.

There's a sailing uma vlog on YouTube where they have a look at the lock "control room" at Sutton Harbour which is mildly interesting. Guernsey is a good shout, you should have a nice beam reach there and back if the weather behaves. Better than bashing to Scilly and you'll be able to get a pontoon instead of a swinging mooring.