My right arm is still giving me a bit of trouble.

Pulled something or some things in my shoulder and elbow, and this week my thumb is feeling a little bit numb; feels like it's coated in a thin layer of wax, with occasional pins and needles, so I have to wonder if I've caught a nerve.

I have a couple of gigs this weekend; I'm resting my arm for now and staying away from my guitar, but I figure if I find I still can't properly play again come the two gigs on Friday and Saturday (I can still sing, so I'm not totally redundant) then next week I think I'm going to have to go seek some professional help.

I don't know there's much our vaunted NHS can or will do, the state that it's in these days, certainly not in any kind of reasonable time, and the GP's surgery proved to be a waste of time reasonable or otherwise.

My misery was compounded in the early hours of this morning. The warm days and nights are playing havoc with the dermatitis that still covers a significant proportion of my poor abused body (I should add I have stayed out of lake water for some weeks now). The itching is excruciating.

Around 0400 this morning, between my crawling skin and my throbbing arm I was awake and writhing. I got out of bed, wandered blearily into the bathroom; looked out of the window and dully observed it had been raining, then realised that the loud buzzing wasn't my usual tinnitus.

I stared in bafflement at a small swarm of about a couple of dozen insects that had come in through the open window and out of the rain and were bouncing around the bathroom in a state of some excitement. I brushed one off of me, wondering in my early hours daze if it was some kind of a bee, then another stung me on my shoulder as if to prove the point.

There is a next of them in the eaves of my neighbour's house. We've been wondering if they are bees or wasps and what to do about them.

I can now confirm the confounded things are most definitely wasps.

I shut the window, hastily retreated, closing the door, and fetched the bug spray from under the kitchen sink. They'd stung my good shoulder, so at least I was now balanced in my misery and discomfort. Returning up stairs, I opened the bathroom door to a crack and sprayed the bug spray blindly and in generous quantities in through said crack before closing the door tight and going back to bed.

I did eventually doze off. To surprisingly vivid dreams of  Nikki and I chasing hoards of excited wasps around our bedroom in vain, armed with cans of bug spray that kept spraying shaving foam.

Between my skin and my arm, I am acutely conscious of how the various obsessions that keep me stable, like gigs, karate, sailing or even just walking the dogs, pushing a mouse about on a desk or typing on a keyboard depend upon my being able-bodied.

It leaves me profoundly grateful that I am, despite my present discomfort, and deeply sympathetic for those who are not.

And I've completely side-tracked myself. 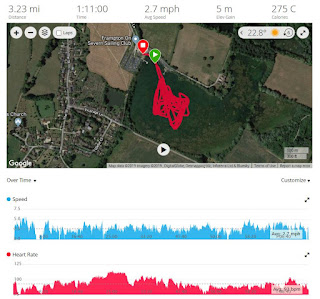 With my arm in the state that it is, Amanda agreed to helm the Enterprise again for the Wednesday evening race. A little bit more wind than the week before, but still quite light and shifty. It was a fair enough turnout for the handicap fleet: four Enterprises, a British Moth and a Wanderer.

We had an indifferent start and a terrible first beat to windward, my fault not hers, failing to find a grove to get the boat moving, catching up repeatedly on weed, and falling out the back of the fleet. And then they all rafted up on each other in a lull at the windward mark, having got there all together at the same time, sitting on each others' wind and generally getting in each others' way.

So we arrived late to the party to find a small gap having opened up between the boat furthest inside and the mark itself; not our water but none of them in any position to stop us sneaking through and taking it for our own. By the next mark rounding we were up into second place, just behind the Wanderer

It was a a sloppy rounding, gybing from a dead run on top of the mark and needing to harden up fast to a close-hauled fetch. It left us low on the layline for the third mark.

I called it wrong, advising Amanda to tack too close to the mark and bear away astern of the incoming boats, not accounting for the fact that she's still relatively new to the driving seat. Alan's Enterprise, coming in on starboard, had to dodge to avoid tee-boning us; I am grateful that the man is a gent.

Falling back out the bottom of the fleet, we ran down to the leeward mark with too many boats around us to find clear water to take our turns. We duly rounded the mark amidst the pack and struck out to the right hand side of the beat to take the requisite 720 penalty. Everybody else tacked off and went left.

Gybe, tack, gybe, tack, we then hardened up and held out to the right hand side until we reached the sheer line beneath the trees at top of the beat, a little short of the starboard layline. Tacked, and a lovely lift took us right up to the mark. Meanwhile the rest of the fleet out on the left were languishing in the weed and headed by the fickle wind so were left to follow us around.

Amanda kept her hard won lead for the rest of the race.

We did lose some precious seconds over the rest of the race to a few poor navigational choices on my part that saw us sailing into weed we couldn't see. But between my amicable, persistent nagging, "Up, up, up! Harden up" or "Bear away! Don't pinch!" or "Remember, wide in, no, wider, wider! Now sheet in, sheet! Turn, turn!" (rinse and repeat) and Amanda's exceptionally capable, ever patient helmsmanship, we finally finished 1st boat on the water.

In the clubhouse we were beaten by mere seconds into 2nd place after adjustment for handicap by Tony and his Moth, but it was a good race, very well sailed. I'm exceptionally pleased with how this is going. We're going to do it again next week.

Sailing back in after the finish, Amanda handed the helm over to me to land the boat, volunteering to be the one to go over the side as we reached the shore so that I could keep my feet dry.