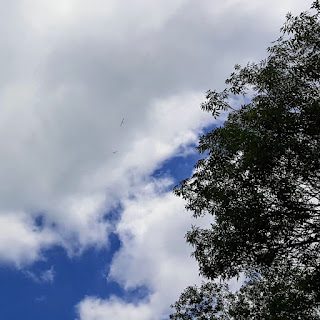 Wednesday evening racing at Frampton. It was a warm night, with light, shifty winds; enough to keep the boat moving but nothing especially challenging.

However, with no grip in my right hand and a nasty, nagging pain in my shoulder and elbow that's still keeping me awake at night, rather than skipping sailing altogether as I'd regretfully done on Sunday, I asked Amanda to take the helm. I figured I could probably manage to crew her Enterprise one-handed.

We've been racing the Ent together now pretty much weekly since early last Autumn, but Amanda very unpracticed in the back seat. I think she helmed once last year, and nothing since then. So I figured a bit of coaching from the front seat would be fun for both of us, but thought we'd keep things completely unpressured. More of a "social sail" I reasoned to myself when convincing her to swap, it didn't matter where we finished.

As long as we beat the other Enterprises, of course.

She did good; nine boats in our fleet in total, six Ents including our own plus a Wanderer, a single handed British Moth and a Rooster-rigged Laser. Without an awful lot of coaching (aka. "nagging") from me, Amanda pulled off a respectable start and a good first beat and then sailed a fast course through the rest of the race, beating all the other Ents except for Geoff and Sue, and finishing 3rd overall.

I think that was quite an achievement. It's a funny old thing, but it felt as good to take a 3rd place with Amanda at the helm as it does to beat everybody on my own with the Laser.

I think we should try the same again next week.


The photo at the top of this post was taken lunch time Wednesday; two gliders out of my old club at neighbouring Aston Down, soaring in a thermal above my office. A friend and colleague asked if I missed it.

A realisation struck me - of course I do, especially when watching old friends dance beneath the clouds like that. But not so much as I'd miss the wind and the water, particularly the sea, were I to give that up to return.
Posted by tatali0n