I’ve been on a bit of a winning streak for the last few weeks at Frampton, so if I’ve done my sums right, I could probably afford to take next Sunday off and not bother to sail either of the final Class or Pursuit races next weekend. I’m not going to though. That would be silly.

This Sunday was a lower turnout for some reason, perhaps the weather, perhaps because the current Spring series is now drawing to a close. Three Lasers raced in the Class (although the lake was, of course, busier than that because both the Solo and Handicap fleets were also racing). Eight boats sailed in the Pursuit.

I won both, but they made me work for it. 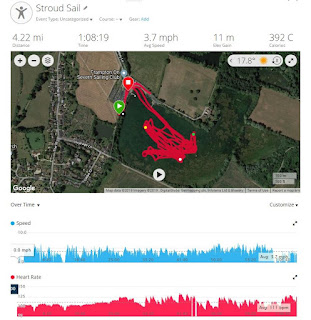 In the class race, Mike got a much better start and took an early lead, leaving me snapping at his transom for most of the hour that followed. I got past him on one of the beats mid-race, but he took my wind on the run that followed and won the overlap at the leeward rounding, nipping back out in front of me again.

Then I got lucky on the last beat of the final lap. With me still just snapping at his heels, he rounded ahead and held onto the starboard beat, presumably to secure height on the layline on what had now, with the wind backing through the race, become something of a close fetch instead of the beat it should've been. With no other real options open to me, I tacked off straight away, and Mike was just a little slow to respond and cover me. I then got very lucky with a lift that let me lay the windward mark in one and easily clear it ahead of him.

I was then able to maint the lead through the final minutes around the last couple of marks to cross the line clear ahead of him.

He was good humoured about it, but understandably frustrated I think. I almost felt bad taking the win from him.

The wind backed considerably for the second race, a pursuit, and strengthened, some of the gusts giving some very exhilarating down-wind sailing. I managed a much cleaner start, pulling ahead of Mike straight away and making it around the windward mark first, after which I slowly consolidated my lead on him, picking off the slower boats ahead of us one by one. 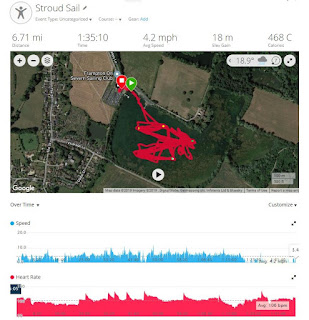 Then it all went wrong. About half way through, now out in the lead, I got caught in a nasty gust running downwind towards one of the gybe marks. The boat screamed along, on the edge of being out of control, but I just about managed to keep her on her feet. As the gybe mark closed fast, with plenty of room between myself and Mike, tailing me in second, I decided to play it safe, and instead of gybing, hardened up to wear the boat around with a tack.

With the sail controls all set for downwind and the daggerboard still halfway up, still caught in the teeth of the gust the boat hit weed and stopped, dead head to wind, caught in irons. I frantically tried to back the boat out, to get her back off the wind and sailing again, but in the time it took me, Mike had caught up.  As I left the gybe mark to port, he was no more than a boat length behind me and moving fast.

Reaching down to the leeward mark at Yellow, still not settled, with the sail controls all out of kilter, I tried to make the necessary adjustments and, head in the boat, got smacked hard by another gust coming at me unnoticed from astern. We lost control and capsized to windward with a smack.

Kicking myself, desperately grabbing for anything to stop the boat from blowing away from me and trying to secure my plastic drinks bottle back into the cockpit before pulling myself around the stern of the dinghy and back up to the daggerboard to begin the recovery, I kept expecting Mike to go screaming past me at any moment. Instead, Rob went tearing mast in his Solo with a big grin on his face. I pulled myself up onto the daggerboard, and as the boom swung over with a crack, I saw Mike  still behind me, his own Laser tipped ignominiously onto its side, as he struggled with his own capsize recovery.

My mast to windward, the mainsail was pinned by the wind to the water, and reluctant to come up at first. But when it did, it came up fast with the full weight of the still gusting wind behind it. I slipped over the gunwale and into the cockpit as she swung up, grabbing the tiller as I went and throwing my weight out the now windward side to arrest the roll. As the boat levelled back out, just barely avoiding a second capsize, she was already facing downwind in the direction I wanted to go, and moving fast even before I could sheet in on the mainsheet and bring the sail back under control.

Astern, Mike was also now back on his feet, but his boat facing the other direction and stuck in irons, losing precious moments to me as he struggled to bring his boat through and off the wind and get her sailing again.

The rest of the race was spent catching Rob back up, and then once past him again, struggling to break clear. Upwind I had a clear advantage, pointing higher and sailing faster, but down wind he was more than a match for me in boat speed. He clung tenaciously on to my transom throughout the remainder of the race, always threatening, until the very last lap when I finally broke free into clean air and secured my lead.

It was a good afternoon. Low numbers out on the water, but good, close racing throughout. I can almost forgive Frampton the weed and the water levels. Almost. Although the combination of the two is having a detrimental effect on the water quality as well now. It’s a real pity. I know the Club’s committee are doing what they can, but our hands are tied by Natural England as the lake is a designated “site of special scientific interest”.

Ironically this is, in part, due to some of the vegetation that grows there. Or did so once. To my own uninformed eye, everything seems choked out by Elodia (Canadian pond weed) these days.