Sunday morning saw a weather front barge through bringing change; from the warm, balmy night we'd enjoyed for the gig on the banks of the Severn, we were now looking at heavy rain, a chilly drop in the temperature and blustering, squally winds frequently gusting up to F5.

I, of course, went sailing. 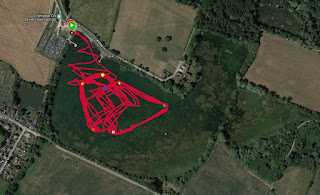 It was only a small turnout for the fleet, but fun, with Jon and Andrew, their Lasers rigged down to a radial sails, giving me a good run for my money with my standard rig in the class race at 2pm, and then Ian and Jon leading me a hard chase in the pursuit race that followed.

I caught them both in the last ten minutes of the second race, but on trying to pass, Jon aggressively luffed me up to try to stop me getting an overlap at the leeward Yellow mark. He failed to prevent or clear the overlap, but pushed me far enough over that I went by the lee, accidentally gybed and capsized on top of the mark. Ian, pinned on the outside during the run down tried to sneak in through the inside, but had to abort and tack around to avoid t-boning my upturned hull. I'm very grateful at least one of us was in control! 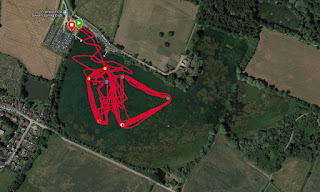 I thought that'd be it. By the time I was back up and going, they were both across to the other side of the lake, bearing away around Red-White and once again well ahead of me. But a good lift on the next beat up to Red graced me with a little bit of luck and let me close the gap up nicely, then on the fetch across from Yellow to Red-White that followed (Yellow being the leeward mark I'd previously wiped out on on the last lap), I went low and free, clearing Jon's lee where he couldn't touch me and then just pinched enough to get around the mark hot on Ian's tail, without needing a tack.

I caught Ian on the run down to Green, securing the inside overlap by the time we had to gybe at the mark, and pulling ahead into clean air to consolidate the lead in the final five minutes.

It could so easily have gone either way.
Posted by tatali0n