Laser: too nice not to

I snuck out from the office yesterday afternoon.

The Wednesday evening season is over now at Frampton, the evenings are drawing in too early for us to fit a race in after work. But there has been a contingent of club members, those fortunate enough not to be chained to office hours through merit of retirement or fortuitous circumstance, that has been regularly racing on Wednesday afternoons throughout the year.

Normally, circumstances are such that I can only envy them via the webcam, if I have even the time for as much as that during the day.

However, the forecast for yesterday was blue sky, an unseasonably  balmy 22c and 20 knots or so of wind from the southwest. There was nothing scheduled for my afternoon that couldn't be or hadn't already been postponed or shifted; it was simply impossible to resist.

It was great fun. The wind was a bit blustery, but didn't come through as hard as originally forecast. A pursuit race with a fleet of 12 boats, the three Lasers on the start line were the fastest handicap so we were the hound to everybody else's fox.

A simple figure of eight course, we agreed on it early, so rather than kicking around on shore, I launched almost as soon as I was rigged and bashed around the lake for half an hour before the rest joined me. I had an indifferent start, but made up for it on the first beat, finding clean air and sailing faster and flatter than both Jon and Les in the other two Lasers, so beat them around the windward mark easily.

Feeling just a little bit cocky as I bore away in front of my immediate competition, my over-confidence bit me back hard. Something went horribly wrong in the balance or the rope handling, I'm still not entirely sure what or how, but the next thing the boat has broached and then capsized violently to windward, dropping me in for a rather unexpected swim.

I got the boat back up and spent the next twenty minutes catching the other two back up, before passing them once again and continuing to work my way up through the rest of the fleet.

With less than ten minutes to go, I finally caught up with the leading pack of Solos. I let them all cluster up on top of each other around the leeward mark, and then pulling the controls on hard, came in wide and out tight, pointing quickly up onto the beat to windward of them all, moving higher and faster.

As we were all closing onto the leeward bank, I went for a quick tack, intending to break away early, find clean air and climb over the top of the lot of them before the next mark.

As the boom came across, it snagged the top of my buoyancy aid, trapping me to leeward, and pulling the boat over on top of me. They sailed on. I finally squeezed under the boom and rolled up and over the top of the gunwale as the boat toppled, landing on the dagger-board with the boat still pointed into wind, so had her up again in seconds. But sat stalled in irons, head to wind.

The next precious moments were spent desperately trying to get the boat back off the wind and sailing again as Jon and his Laser rounded the mark behind me in the company of a Wanderer, and both sailed past.

The last ten minutes of the race were spent trying to claw my hard work back. I passed the Wanderer easily, but Jon having gained a lead on me was more reluctant to give it back. I briefly snuck past as he caught up with Roger in the rear most of the leading Solos, and then misjudged the final beat and both he and the Roger stole the lead back from me on the last mark rounding.

The clock ran out, with Jon taking a well deserved and hard won 4th place, Roger 5th and me relegated to a humble 6th in consequence of my cock-sure overconfidence and spectacularly clumsy boat handling. 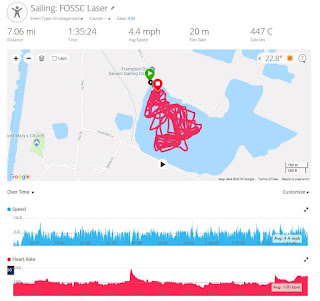 Blue skies, warm air, sparkly blue water and a fresh wind, I'd had a brilliant afternoon, so much so I couldn't even bring myself to feel disappointed about the capsizes and the race they'd cost me.

According to my watch, I sailed just over 7 statute miles across1 hour and 35 minutes. I've no idea how it worked out I gained 20m of elevation. The lake is non tidal, and even out on the Bristol Channel, 20m would be somewhat alarming.

Most amusingly from the track however, you can see the capsizes. They are marked by a drop on the blue line to 0 mph and a corresponding spike in my pulse on the red that is probably as much shame and embarrassment over the indignity of a dunking as the exertion of getting the boat back up.

Interestingly, the second capsize cost me more in time than the first, according to the track. This despite the fact that it was a dry capsize that I recovered from quickly, whereas the first was very wet and had me swimming around the boat to climb onto the dagger-board from the water. However, the first capsize was downwind, so even on her side, the boat was still moving in the direction I wanted to go (and faster than I could swim: I had to hang on to stay with her) whereas the second was upwind, and even once the boat was up, I lost a lot of time stuck head to wind and going nowhere.
Posted by tatali0n