Slipped down to the lake to play with the Laser again for a couple of hours on Friday evening, nice bit of movement in the air at first, but then predictably faded as evening drew on. One of the perks of a single-hander is that I can, if I wish, sail any time I have the time and inclination to do so. And for four out of five evenings in last week, I did just that.

A little over indulgent, some might say. I wouldn't disagree, but remain unashamedly unrepentant.

The weekend was warm, sunny, and without too much wind. Would've been perfect for a trip out to Fowey and back with Calstar, but I dutifully skipped the chance and took Nik out on Saturday night instead. A reasonably low key gathering in a reasonably quiet bar in town with good company, it wasn't as horrific an experience as I'd feared it might be.

Three races Sunday, two general handicaps and a pursuit. Bright sun, but almost no wind. My knees have taken quite a hammering of late, as keeping the dinghy trimmed and balanced in drifting conditions involves a lot of shifting about on your knees.

The first race was tedious, very little wind, and the little we had blowing in from random directions. The pursuit went well, a little more wind filling in, and I held my position well until fouled by another boat that gybed on top of me as we were boat running by the lee neck down to green. I dodged his boom, so no damage was done, but it cost me three places, of which I only managed to claw back two before the end of the race.

On the last lap of the third race the wind suddenly filled in. I was on a close reach as it happened, leading a pack of Solos and Pete in his Comet. I hiked out hard to keep the boat flat and as she leapt up onto the plane, accelerating in the gust, the toe-strap snapped with a loud pop and I tumbled backwards out of the boat.

Although it came as something of a shock to suddenly find myself underwater looking up at the hull, I fortunately let go of the tiller extension but manged to keep a hold of the mainsheet. Resurfacing, I porpoised back up over the gunwale feeling very much like a half-drowned cat, picked the tiller extension back up and carried on sailing.

I didn't lose my place. I did, however, lose my sunglasses. 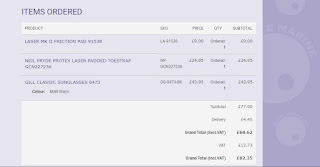 Replacements are in the post, needed of course for the next race on Wednesday evening. Shame about the shades, one of the more comfortable pairs I've had. I was really quite fond of them. Took the opportunity to order a new friction brake for the dagger-board, the original being very worn and not up to the job anymore of keeping the board down on the beat.

[22/05 footnote: just noticed that I wrote but never published this. Hitting the button now, somewhat belatedly. Shades, toe-strap and replacement friction brake have since arrived, been fitted and all worked very well thank-you when we last raced on Sunday]
Posted by tatali0n