Freefall: nostalgia ain't all it used to be 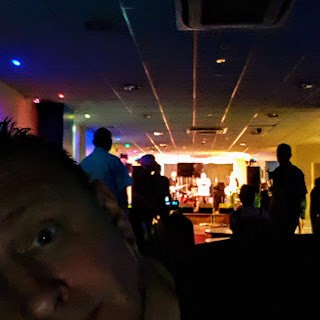 Just before I was about to go on Sunday night, a lady in the audience came up to me and asked if I used to be in a band called Anastasia. Yes, I did. And didn't you used to play a song called Last Man Standing? Yes, I wrote that. Aw, she said, that used to be my favourite song!

Aside from being obviously touched, I was also quietly amused by the coincidence that a band that I'd started back in 1992 and effectively ended in 2004 would come back to nudge me out of the blue twice in one weekend. And flattered that the music we made back then touched at least a couple of souls in a way that has obviously stayed with them ever since. 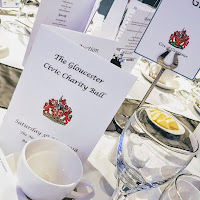 In the end, the third gig went fine. Our friend Paul Mullen of Panik Events was running the sound desk and worked miracles. Being the third gig in as many days, I honestly thought it was going to be the hardest on my voice. I hadn't actually been certain there was anything left of my voice aside a croak until the opening song. But it all came back in those first few bars, and vocally, the third gig turned out to be the strongest.

Could barely speak yesterday and definitely croaking today though.

Aside from the very first snap, most of the photos accompanying this post were taken the night before when we played for the Gloucester Civic Ball. One of the two charities it was raising money for was for a local dog shelter, which pleased me.

Nice thing about a Civic Ball when it's held in a posh hotel is that, whilst there is always a lot of hanging around after the soundcheck whilst the guests eat and then various dignitaries speak, it is always a comfortable environment to hang around in.
Posted by tatali0n