Plans past and present

Of plans past. Of the previously mentioned Passage Planning Exam I sat last Saturday, happy to say I passed. Didn't get a mark or a grade, just a note from the instructor commenting that he'd be more than happy to sail the said passage with me. 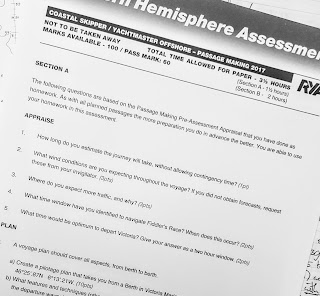 Pleased it's done. Pleased I don't have to do it again. I suspect I probably prepared the least out of our group for this exam, but still accrued more than 24 hours of prep and revision on it over Christmas and the New Year. Of which I reckon I probably used about 3%. If that.

I could have probably passed the exam without said preparation back in December, and would have saved myself all the stress and headache had the chance been offered.

But it's still done. And I am content with that.


Of plans present. Too windy this weekend to risk breaking Calstar. However, heading down to the lake tomorrow to help out with inspecting the club's training fleet. Also told Dad I'd help him take Ondine's mast down and wrap her up for the winter. She's not our boat anymore, as the Club brought her off Dad for their Sailability Fleet when we moved on to Calstar. But he still feels obliged to keep an eye on her for them.

Somebody should have taken her mast down and covered her up properly back when the season ended.

Apparently, there are still boats racing every Sunday on the lake despite it being out of season. It's an informal set of races encouragingly called the "Icicle" series. One race, every Sunday, a pursuit starting at 1100.

Looks windy enough for me to want to join them, and I have somebody daft enough to want to crew for me. I can't wait. It'll be the first time I've sailed this year. The first time since the beginning of December, in fact.

That's far too long to be land-locked.
Posted by tatali0n