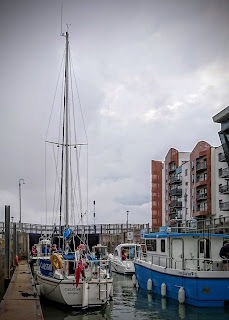 Dad won't abide the thought of me climbing our mast.

I've climbed taller trees, much taller. And rock faces. And buildings. I was playing with ropes and carabiners and improvising climbing harnesses long before I really got interested in sailing. Even now, some thirty years on from heyday of most of my simian antics, a 10m mast doesn't present too much of an obstacle. It already has safety lines rigged, in effect. And I'd love to get a photo from the top of it.

But nope, he's not happy with the idea at all. I could push the issue, but I can see how uncomfortable it makes him.

"If you managed to climb all the way up, you'd never work out how to change the bulb" was the last reason for putting me off. For the record, I can change a bulb. 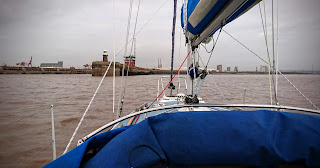 Anyway. Dad wants to change the deck-lights that shine down from our spreaders for LED's. Whilst we're up there ("we" as in a general collective, as opposed to "we" including "me" for reasons just explained) we might as well also change the steaming light and anchor light for LED's. The nav lights are on the pulpit and pushpit, so within easy reach. Dad has already changed the stern light.

In addition to that, we had the main running lines replaced on the single-line reefing whilst the boat was in Swansea, but the man that did the job didn't renewal the forward running pennants, and they really need doing.

The upshot is that Dad made arrangements with Jamie of Traditional Rigging to take care of all of the above. He's based at Underfall Yard in Bristol's Floating Harbour, so we had to deliver the boat to him last Saturday. Which led me to suspect that this work, all of it nice to have but for the moment, none of it essential, was in large part just an excuse for Dad to take the boat up the Avon, through the sea lock and into Bristol.

It was a nice run. The river usually is.

We had the first lock of Saturday morning's tide booked out of Portishead for 0800. High water was about noon in Bristol, and they were expecting us for a 1000 lock in. It rained for the duration of the drive down to Portishead, but it eased and then stopped completely as we made ready to cast off. The rest of the morning remained grey and overcast but otherwise dry.

We shared the lock out with five other vessels; cod season in all but upon us now, and they were all bristling with rods and hooks and enthusiastically eager anglers keen for the morning's chase. There was a slight chop pushing as the lock gates opened to let us out, 10 knots of north-easterly made Portishead a lee shore and dampened any notion I might have had of hauling up the sails for the mile's run up to the mouth of the Avon.

Depends what you read and who you talk to, but boats are nominally supposed to report in on the VHF to Bristol VTS if they're entering the river. I did so as we were passing the gates of Royal Portbury, and was somewhat testily informed by the operator that if I was now approaching the mouth of the river, I was obviously clear of the shipping in King Road, the obvious subtext being what was I therefore bothering him for? It's a fair point. His only interest in folk like me is that we stay clear of his shipping, and it's very clear to me, barring darkness or fog, what's going on in the King Road without bothering VTS to find out.

The fifty minute run up the river was picturesque as always. The engine was quiet, barely more than ticking over just enough to give us steerage whilst the flooding tide did the bulk of the work. High, muddy banks gave way to rocky cliff faces, wreathed with overhanging, arboreal woodland, the atmosphere at times primeval, disturbed only by the calling of birds and the occasional rolling of fish on the surface of the heavily silted water.

We called up City Docks Radio on the VHF to announce our arrival as we turned into the final straight running under the iconic Clifton Suspension Bridge at about 0938, having made very good time on the tide. We were greeted warmly by the harbour master, and invited to make our way up and stem the tide off the knuckle of the harbour wall whilst they cleared the outbound traffic currently locking down to the river.

Locking in was hassle free, having the spacious sea lock entirely to ourselves. They took our lines up and passed them back to us so we could adjust them through our ascent.

The two not insignificant road bridges guarding the entrance and exit from Cumberland Basin beyond were swung in quick succession once we were up, the Bristol traffic waiting patiently whilst we traversed the basin into the floating harbour beyond with minimal waiting around on our part. And then it was a quick trot around the corner to come alongside a pontoon in Underfall Yard where we made the boat tidy and secure for Jamie to do the promised work in the week to come.

We're hoping, with the work done, to take her back down the river and home to Portishead next weekend.
Posted by tatali0n